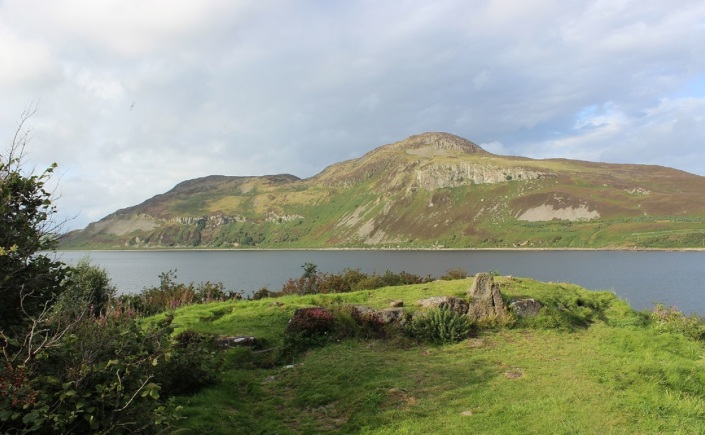 Long summer days mean it’s possible to really make the most of where you are visiting on holiday.  After chilling on the beach by the Preaching Cave in Kilpatrick, we drove round the southern edge of the island to Sandbraes, just past Whiting Bay.  Parking alongside some playing fields in front of the Whiting Bay and Kildonan Church (postcode KA27 8RE) just off the A841, we bundled out of the car for our second stroll of the day, this time, to Kingscross Point.

We walked down the lane keeping the church to our left, catching glimpses of the sea ahead.  After crossing a small bridge, we turned right and passed some lovely cottages with enviable views to over the water, towards Whiting Bay. 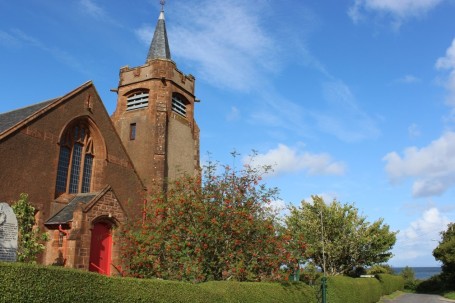 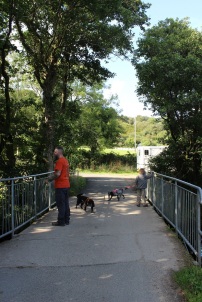 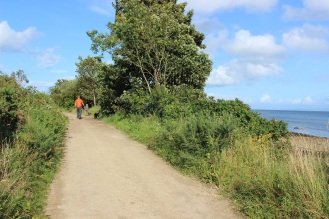 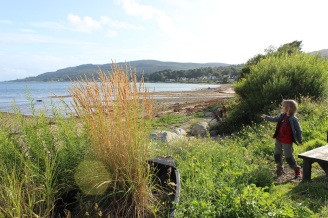 The lane gave way to a pebble beach, edged with trees and we strolled along until we reached a metal gate with a signpost indicating the way to Kingscross Point. 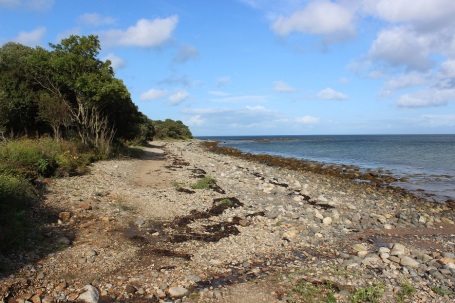 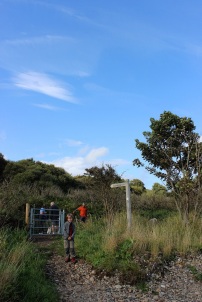 From here, we followed a shrub lined dirt track until we reached a boardwalk leading us into the cool shade of the trees. 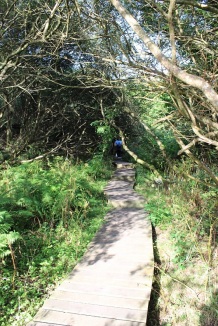 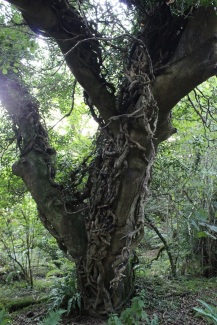 Moss covered branches reached out across the path and dappled light played on the ground as we made our way through this small, tranquil woodland. 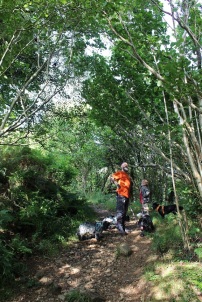 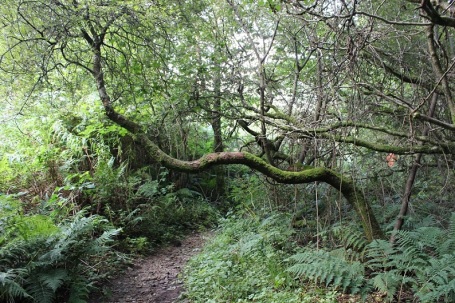 Blinking out into the sunlight again, we crossed a field and spotted horses grazing in a paddock before we disappeared back amongst the trees.  We passed through this short section of woodland and were greeted with a view of Holy Island – the slopes of Mullach Mor rising steeply out of the sea.  The island was home to St Molaise during the 6th century, has been visited by Vikings, was the site of a 13th – 14th century monastery and is now home to the Centre for World Peace and Health.  Continuing in the direction of the island, I spied the forests of bracken either side of the grassy path and made a mental note to check Rocky the Tick Magnet for the blood sucking beasties later. 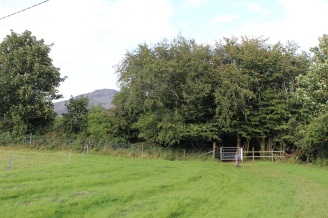 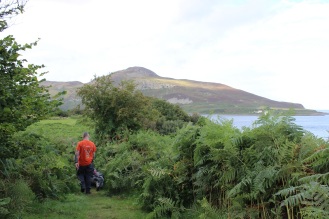 We crossed another field and were aware of rabbits cautiously eying the pack of excitable spaniels invading their territory.  Now they may have looked cute, but so did the Killer Rabbit of Caerbannog, and that bunny had a vicious streak a mile wide, so the mutts stayed on their leads for everyone’s safety. 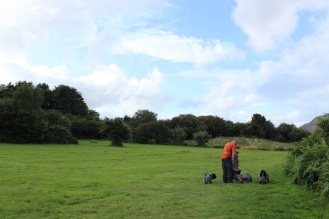 At the end of the field, we scrambled over a bracken and heather clad mound – we had reached Kingscross Point. 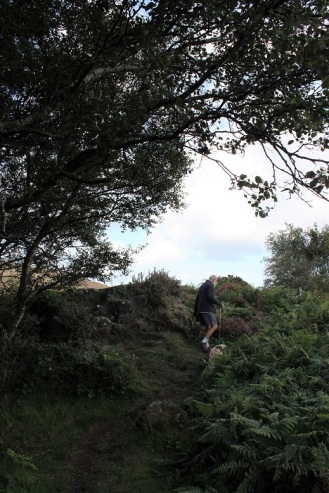 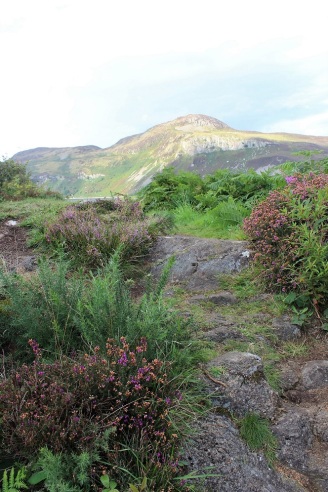 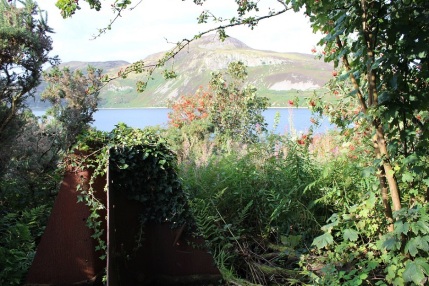 Now, I had read a little about the area in the cottage, so I knew about the legend of Robert the Bruce and the spider in the King’s Cave, and that with his newly found resolve, he departed Arran from Kingscross Point to restart his campaign on the mainland, which culminated in the defeat of Edward the Second’s troops at Bannockburn.  And whilst admiring the views from the point, we found the cairn that marks the supposed point of departure. 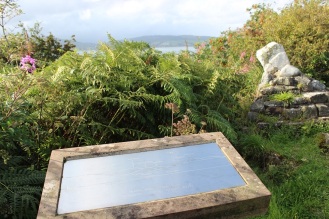 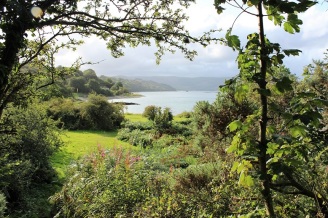 I also knew that there was a Viking burial mound to be found, and we sat down at what I thought was the site, taking everything in. 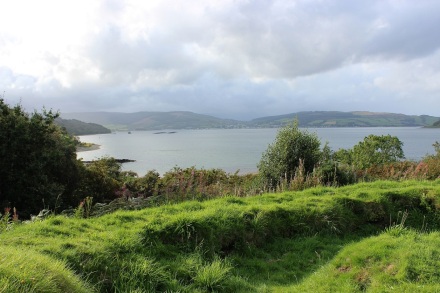 The Viking burial mound is a boat grave, which I have since found out (after reading The Guide to Mysterious Arran) contained the body of a woman.  Excavations of the site also found iron rivets and nails from the boat and pieces of a whalebone plaque.

As Rowan explored the mound, the ditch running round it and outer wall, I remember thinking how big it was.  It didn’t occur to me it might be anything else other than the boat grave.  However, it turns out we were actually sat at a dun – a type of small hill fort, possibly from the Iron Age, where finds have included hearths, charcoal and bone.  We had walked over the Viking burial mound, without realising, to reach the dun.  In the photo below (without Rowan), it is possible to make out part of the outline of the boat grave, just in front of the line of rocks. 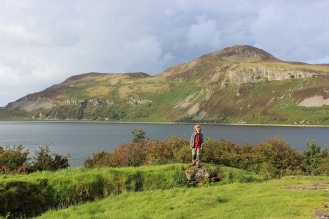 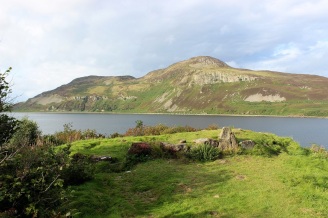 Eventually, it was time to head back the way we had come, with Bracken leading the way down the boardwalk and views of Whiting Bay ahead.  There was just time for some stone skimming before we returned to the cottage to get the log fire rocking and watch Rocky and Pebble flake out in front of it.

We had walked two, relatively flat miles there and back – you can find the route here.  And if you feel like visiting Arran, have a look below at some other walks on the island. 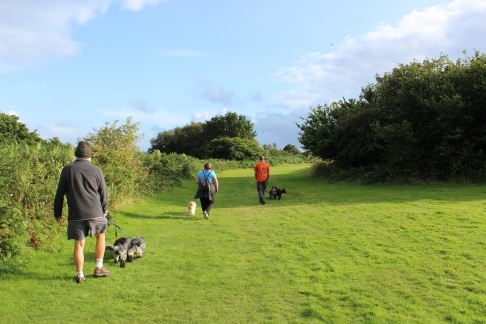 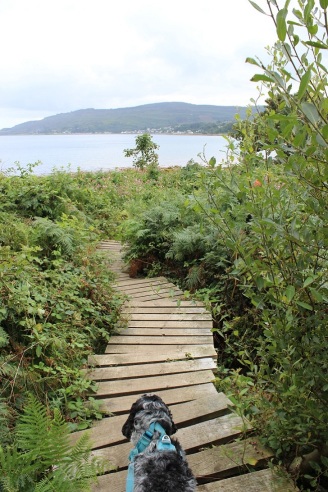 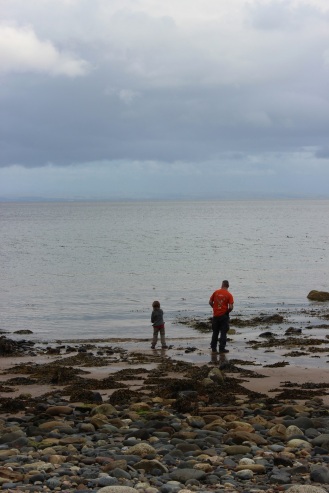 2 thoughts on “Kingscross Point – Kings, Vikings and a Surprise Fort”