Most of my previous walking has been done in the Lake District.  When I open the OS map to plan a walk, it is criss-crossed with green and black dashed lines indicating footpaths and right of ways.  This was not the case when I opened a map of Arran.  Contours and streams were there, and lots of other symbols, lines and colours that make maps so brilliant to look at – but not too many footpaths.  I guess the Scottish Outdoor Access Code means that much of the landscape is one big right of way (within reason).  But it came as a bit of a shock when I was trying to plan a day in the hills for us.  After consulting my guide book, I decided that Coire Fhionn Lochan would be the walk for us.

It was a short drive from our cottage to Mid Thundergay and the start of the walk.  After leaving the car in a roadside parking bay, we spotted a signpost which pointed the way to our destination, directing us up a single track road between a cluster of houses. 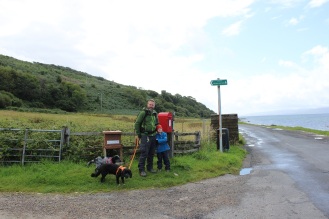 Once past the houses, a grassy path climbed gently to a gate, also signposted to Coire Fhionn Lochan.  We were on the right track.  We passed through, but only after Rowan had his now customary gate ride.

A nice easy gradient eased us into the walk.  The trail was fringed by a variety of grasses, bracken and heathers making for a beautiful colour palette against the blue sky and white fluffy clouds.  We spotted another furry caterpillar, making its way through the long grass and ahead, the domed top of Meall nan Damh poked out above the horizon.

After about half a mile, much to the boy’s excitement, we came to a tall stile.  We had gained about 100 metres of height now and were able to survey much more of the countryside around us.  Behind, we could see across the Kilbrannan Sound to Kintyre, and ahead was the promise of mountains, full of greens and purples. 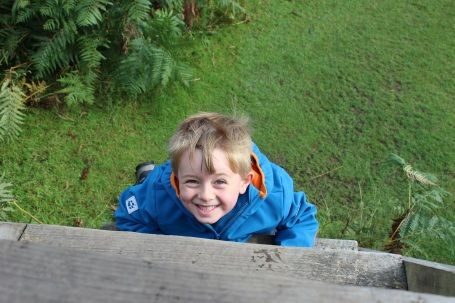 A gravelly track led us to stream – Uisge Soluis Mhoir – which flows from Coire Fhionn Lochan.  We crossed the stepping stones and Rowan resumed his old role of Adventure Leader, blazing a trail along the white grey path leading across open moorland to the mountains beyond. 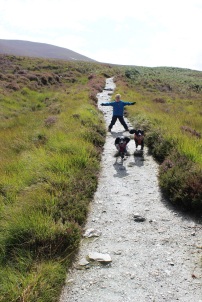 The path now followed the stream we had crossed earlier – the sound of water accompanying us as we strode along.  The rocks in the stream turned the water white as it flowed over on its way to the sea. 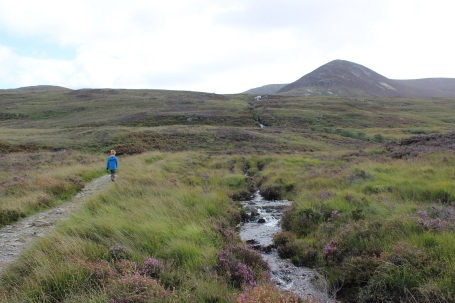 I couldn’t get over the richness of the colours and the many different varieties of plants – there was just so much to look at.  After a while, we crossed the stream again to clamber up some rocks. 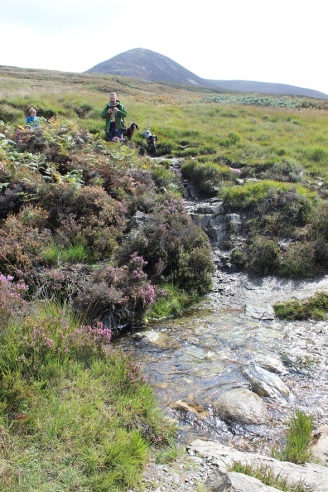 Now the path steepened a little, allowing the stream to cascade down waterfalls through the bracken. The path became pitched and behind we could see the route we had taken, snaking its way across the ground 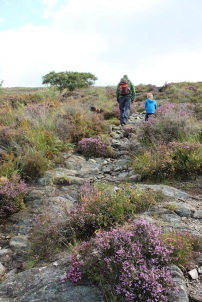 In places, the path was a little scrambly but there were plenty of handy rocks to take a rest. 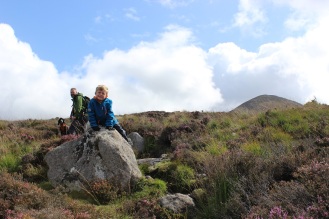 Soon the path levelled off.  Sensing we were nearly there, and wanting to be the first, Rowan ran on ahead to be met with a tranquil tarn, nestled under the steep corrie walls.  Just like Cwm Idwal – a geography teachers dream.

The white beach was the perfect place for some dinner.  The water was so clear and looked very inviting to the part of me that likes a swim in the outdoors. 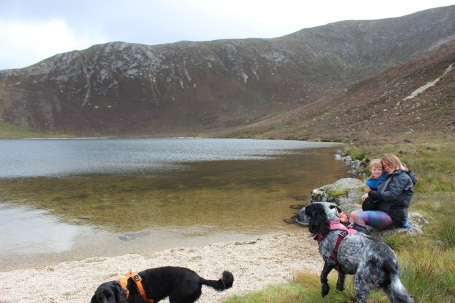 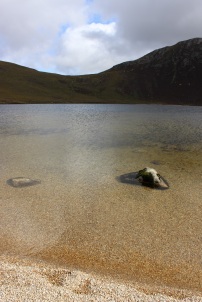 As we sat eating, I noticed the very tempting ridges that enclosed the lochan.  It would have been lovely to walk along the tops, taking in the views.  However, it was getting later in the day so we opted to leave them for another visit.  But we weren’t quite ready to head back, so we decided to head for a cairn in a depression above the opposite side of the lake.  The map did not show a footpath to take, so we struck out across the long grass.

After around 15 minutes or so, we had crested the ridge and found a large navigational cairn.

Beyond the cairn, we could see a large pond and a wet path, so we decided to follow it for a while.

It was getting windy now, but our curiosity was rewarded with a beautiful view of the mountains.  Pebble’s ears demonstrated how blowy it was becoming as she posed for a photo.

Conscious of how far we had walked and therefore, had to walk back, we decided that this would be the extent of our exploration for the day.  We about turned, the sea coming back into view as we followed the path and cairns till we were standing above the lochan again.

From here, we yomped over the spongy grass back to the beach at the lake.

We now just had to retrace our steps back to the car, the view of the sea ahead of us for most of the way back. 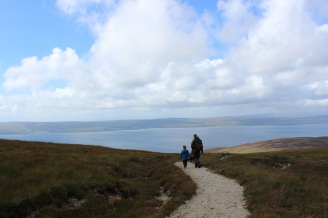 Soon, we reached the tall stile, but not before Pebble had misjudged her jump on the stepping stones and fallen in the stream.  Our princess did not look happy as we pulled her out but she soon shook it off and it wasn’t too far to the car to dry her off. 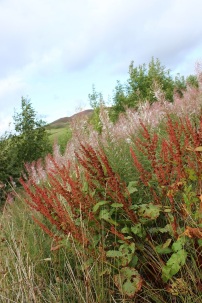 We let Rowan lead the way back to the houses, feeling slightly envious of the people who lived there having this beautiful walk in their back garden.  Our walk was around 4.5 miles climbing 1,400 feet, the route of which you can find here. 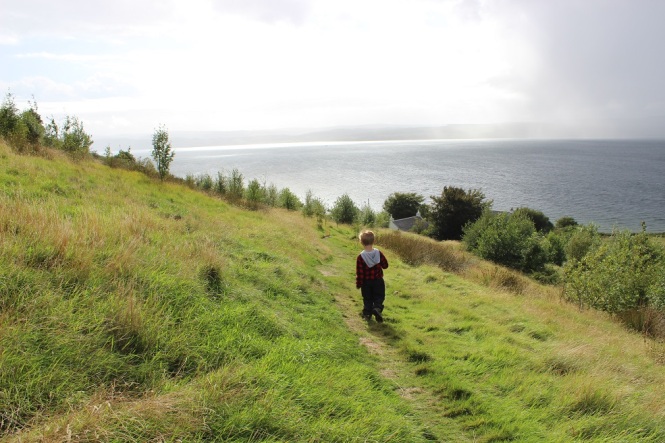