In my last blog post (Run to the Hills), I mentioned how I had been training for the Lakelands Trails 23k trail run.  Well, the day arrived, and it was only the hottest of the year thus far.

We’d stayed up in Ambleside the night before so we didn’t have too much messing around or worry on the morning of the run.  In the prior week, I had been taking my carb loading very seriously.  Chips? Yep, I’m carb loading.  Ice cream?  Sounds like carbs to me.  Whole (sharing) bags of popcorn?  It’s all part of my race preparation.  If carb loading was a sport, I’m pretty sure I’d be a front runner.

I woke early on race day, feeling a mixture of nerves, anticipation but mostly excitement.  Beth and Angela were doing the 14k and I was doing the 23k – all of us running the longest distances we ever had.

After breakfast we strolled down to register in the start area at Rothay Park.  There were four races on that day – 100k which had started the night before, 55k starting an hour before my run, the 23k starting at 11 and 14k starting at 12:30.  The park was full of people stretching, pinning on race numbers and taking in the atmosphere – all here to undertake their own personal challenges.  We watched as the 55k runners set off, clapping as they went.  The countdown was on until my start time – and with it came obsessive drinking followed by obsessive peeing.  Luckily the heat hadn’t taken its toll on the portaloos. 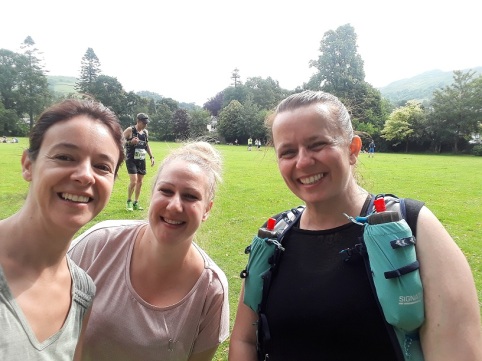 Soon, we were called to the start.  I positioned myself at the back (no point getting in the way) and, as the starting gun went off, we started jogging out of the park, through Ambleside heading for High Sweden Bridge.  Unlike other runs, I went into this one with a bit of a plan which basically consisted of, take it easy – especially on the hills.  Getting any sort of time wasn’t my aim for today, particularly in the heat.  Finishing and enjoying a day in the fells was.  It wasn’t long before I was taking it easy, chatting to the race sweeper, Rachel, as we climbed up a stony path.  I felt pretty good, despite the temperature but I also enjoyed the tree cover when it was there.

After crossing High Sweden Bridge and climbing a stile, I had reached the top of the first hill, overlooking Ambleside and the lake, Windermere.  It felt amazing to be able to visualise the height I had climbed and, after stopping to take some photos, I began my descent down a steep grassy path.  The downhill was fun, but a bit scary – there was a definite sense that my legs might not be able to keep up and I may end up rolling rather than running to the bottom.  I arrived at my first learning of the day – though I had trained on a local hill, it would be good to find a longer steeper one to practise on.

I was sticking firming to my take it easy plan, especially since the heat of the day had sent my own internal forge to record temperatures.  As the trail joined the coffin route from Ambleside to Grasmere I was, once again, happy to have some shade under the trees.

Running along, I passed lots of people out for a leisurely stroll – all with a smile and words of encouragement, all gratefully received.  The path, now climbing again, was gorgeous.  There were little rocky sections and tree roots to jump over and I imagined nimbly springing, elf like, with every footstep.  The reality was a little more….  stompy.  But I eventually reached the top of this second hill and summoning all my will power, I pressed onwards rather than taking a rest on the very tempting bench. 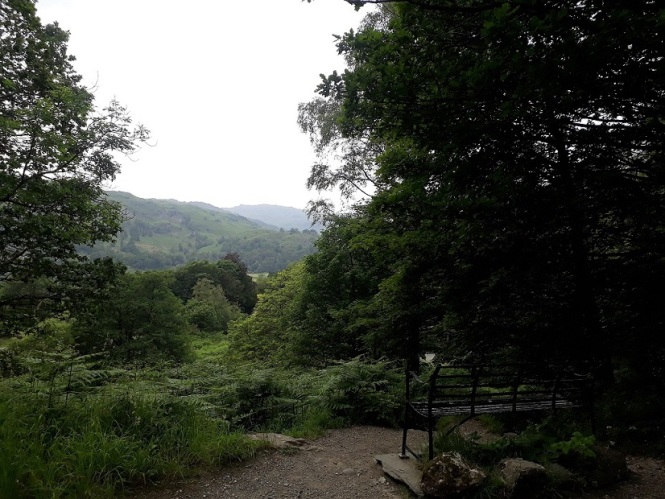 A nice section of downhill followed, leading down to the A591 and a track into Grasmere for the first water/feed station on the route.  I took the opportunity to fill up my water bottles, and had the tastiest pieces of banana I have ever eaten.  Grasmere also marked the point where 23k, 55k and 100k routes coincided for a time.  I found myself completely in awe these long distance runners.

After chat with the friendly marshals whilst filling my face with a few crisps, I briefly considered going to the toilet but quickly released that any wee had already evaporated.  Refreshed, I carried on, through Grasmere, towards Silver Howe.

Leaving the village, I reached the fell-side and another one of those vertical hills I keep finding myself faced with. 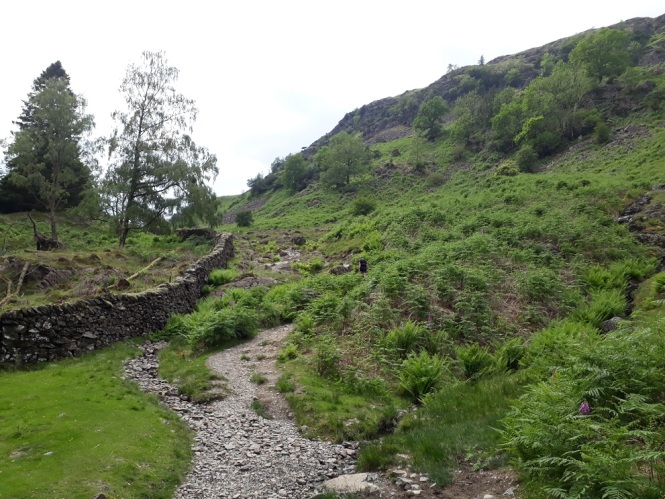 The climb was tough.  I had to keep stopping briefly to catch my breath but by steadily placing one foot, then the other, I finally reached to top.  Or so I thought.  The path continued to wind upwards, so I stopped to admire the views across to the eastern fells before plodding on, noticing that my left calf was beginning to talk to me with little twinges. 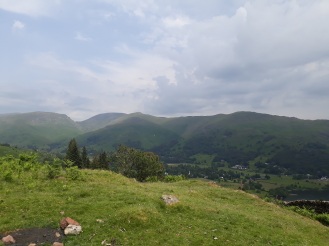 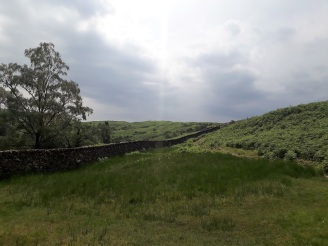 As I reached the actual top, feeling like Frodo carrying the one ring to rule them all to Mount Doom, I was met with a smile and a well done by a marshal, who proceeded to warn me to watch my footing on the next section.  The route ahead took my breath away.  A gorgeous and exciting path snaked across the fell with what seemed like a cavernous drop to the left.  I was in Middle Earth.

I optimistically tried to run this section, but given the combination of tired legs, the narrow path and a little vertigo, I decided to walk rather than risking plunging, Gollum-esque, off the mountain. 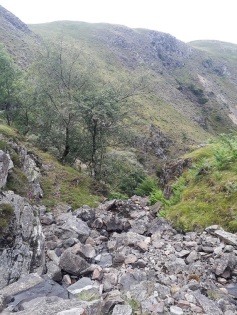 Once past the waterfall, I decided a little run was in order, happily giving way to the faster runners that were coming up behind me.  The atmosphere during the race was so friendly.  I think every person that passed me had words of encouragement – I was loving it.

The path had become rocky in places, and twinges in my calf meant I was gingerly making my way down more technical parts before breaking into my efficient shuffle for the easier sections.  However, at just under 9 miles, my calf decided I was having too much fun, and viciously cramped up, causing me to splat into the rocky section I was negotiating.  I couldn’t move without it getting worse, but I was aware there were more runners coming up behind me and was worried I was blocking people’s path.

As the two 55/100k runners approached, they were more concerned that I was ok, and after reassuring them I was, they continued on.  I prematurely tried to move, resulting in a yelp as my calf cramped up more painfully and as I sat down, I realised that the two runners had come back to see if they could help.  I thanked them, but in all honesty, my muscle and Achilles tendon were so tight at this point, I was scared they might snap if I tried to stretch (dramatic, I know).  I assured them I would be fine once it eased off and they ran on, again.  A huge thanks to these guys should they ever read this blog – you’re awesome!

My enforced ten minute rest for cramp gave me my second and third learning from the day – pay more attention to salts when it is hot, and add some conditioning exercises to my training plans.  After stretching, I tentatively made my way along the route.  As I rounded the fell-side my breath was taken away again as, standing beyond a sea of bracken, were the majestic Langdale Pikes.

One of the many things I loved about this courses was that it took me to places that may not normally visit, giving views of familiar places that I had never seen before.  It also made me think that you don’t have to climb a mountain every time you visit the Lakes – the views are just as glorious and the routes just as interesting slightly lower down the fells.

After another steep downhill, I enjoyed a relatively flat section towards Elterwater.  This would have been a great place to run but by this point, every time I tried my calf would cramp up again, so I satisfied myself with some speed walking.  My feet were feeling it now and I couldn’t wait to get off the innocuous looking path to the left.

As I reached the next water/feed station, my internal temperature could probably have destroyed the one ring just as efficiently as the fires of Mount Doom.  The marshals filled my bottles for me as I chatted and ate foods I thought might help replace my lost salts.  The crisps went down a treat, but the salted peanuts sucked away any remaining moisture and welded to the roof of my mouth.  They were worth it though.

Soon, I reached Elterwater and realised I had 4 miles and two more hills to go.  In my mind, there was no way I wasn’t going to finish!  The path started to climb over a lovely grassy section (which felt so much nicer on underfoot than the “death to all feet path”). 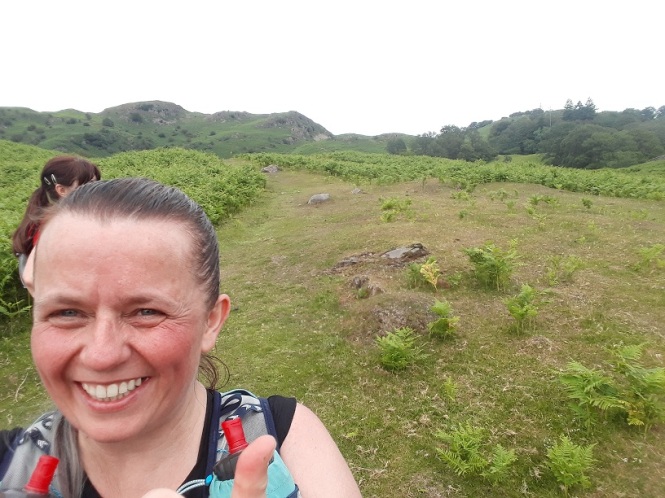 I could see the hills ahead of me and, still unable to run due to crampy calves, I slogged up, convincing myself I was nearly at the top.  But no – another false summit.  There was no way I was stopping though. 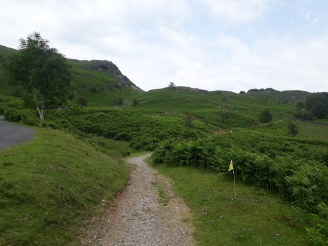 After reaching the top and a short section on the road, I found myself on a track passing by Loughrigg Tarn.  Never has a body of water looked more inviting for a dip but, much with more will power than was required for the very tempting bench, I pressed past – two ladies telling me that I was nearly back – just one more hill. 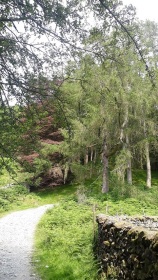 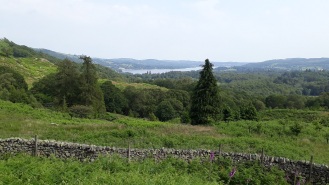 I reached the top and knowing there was just a mile to go, I decided to give running another try, heading down the steep road to Rothay Park.  I could hear the spectators and as I rounded the corner I could Beth and Angela were waiting for me after doing a great job on their own races.

I tried to run to the finish line, but my calf cramped up in the last 50 metres, and I had to return to walking (hobbling), but I had done it.  It was the toughest race I have ever completed, but I did complete it.  I passed through the tent to collect my finisher’s T shirt and met Beth and Angela where all the emotions just welled up inside me and I burst into tears.  Good tears though!

Around 15 miles and 2700 feet of ascent later I had a huge blister on the underside of each of my little toes (hence the foot pain), one very tender calf that couldn’t really bear weight and a huge sense of achievement.  Was I knackered?  Yes.  Will I be back next year for another Lakeland Trails 23k?  Definitely.