You may have noticed from some of my blog posts that, occasionally, I get a little confused with my navigation.  From taking a bearing with the direction of travel arrow pointing in the opposite direction and squinting to try and find paths I can see in the real world but not on the map, to just generally doubting my map reading and decisions – I decided it was time to do something about it and booked myself on not one, but two navigation courses. 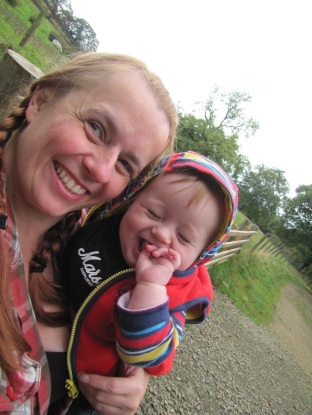 I have had navigation training before.  I did NNAS Silver for my training with Fix the Fells.  But that was around ten years ago, and in that time I have had a baby which apparently shrinks your brain  (I particularly like the baby brain excuse) and subsequently had around four years away from any walking that required the use of a map.  As they say, if you don’t use it, you lose it and I feel that has certainly been the case with me.

In addition to my complete lack of practise, now I am taking Rowan out for some bigger walks, I NEED the navigation to be right.  The more relaxed attitude to map reading was ok when it was just me and Rick.  Don’t get me wrong – I would plan a route and endeavour to make sure we stuck to it, which we always did.  But I didn’t feel the pressure to be right that I do now.  In my head, if we went wrong and ended up having to walk an extra couple of miles, that was fine.  Our legs could do it.  Rowan’s, however, may not, and do I have the strength to carry him for a couple of miles if necessary? Probably not, even with Mum Strength.

In hindsight though, is it even ok to get lost as an adult only party?  Yes, you may cope with it better than a child, but adults get worn out, adults have bad knees that can slow them down and they can get cold if darkness falls.  And any adult can have an accident from ending up in a dangerous place through poor navigation, bad weather or a combination of both.  Do I want to become a Mountain Rescue statistic?  Not if I can help it – so a brush up on navigation it is.

Enter Chris from OookWorks.  He is an experienced Mountain Leader who runs various workshops, guided walks and adventures, as well as making ultralight wild camping gear.  I decided that his navigation workshops were just the thing for me.

I started by joining a small, friendly group for Chris’ navigation and map reading workshop in the beautiful countryside around Rosthwaite.  Armed with our maps and compasses, we started the day by discovering our numbers – the number of steps taken to walk 100 metres.  Mine was 70.  After spending some time interpreting the scale on the map, and reviewing how we could use our compasses to measure how far it would be from where we were to another point on the map, we put it all into practise.  As we walked, we counted, and it was brilliant to watch us all finish the 400 metres within a few feet of each other. 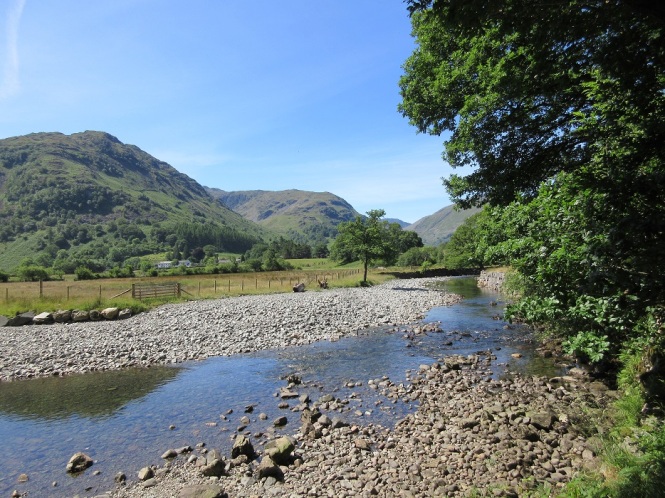 Next we spent some time looking at the details on the map.  And there really is so much detail.  We discussed the different symbols, and types of track, the colours on the map and what they meant, and the contours.  Before we continued along the next section of the walk, we talked about what we would see along the way then ticked it off as we strolled along.

It was whilst doing this that I realised something about why I have been finding navigation harder recently – apart from my shrunken brain and lack of practise that is.  Because I am watching Rowan (and rightly so), I am becoming distracted from the detail on the map.  To help with this, Chris suggested I get Rowan involved in looking at the map as we walk – something I’m now doing as it’s definitely good for both of us.

The surroundings were beautiful and, learning as we went, we began to pay more attention to the things that we could see in the landscape, and how they appeared (or not) on the maps.  Our path began to climb as we made our way to up the fell side.  As well as discovering all things navigation, we were going to reach the summit of a Wainwright – Great Crag. Look out for a post about the route we took soon.

We stopped for lunch at a tarn, where we used the features around us to pin point our position on the map – a handy skill to have.  It was a gorgeous spot and I can’t think of a better classroom.

Next up was taking and walking on a bearing, all the way to the summit of Great Crag.  It was brilliant going off the path.  I enjoyed it so much, I wasn’t even bothered by the potential for blood sucking hitchhikers (though wearing leggings did make me feel better).  But map reading doesn’t end at the summit, and after a photo or two, we made our way down to the car park, putting into practise what we had learnt, always making sure we knew where we were on the map and what was coming up next.

I now had a few weeks to try and hone my skills before my night navigation course.  Going out in the dark simulates low visibility, so even though you may think you’d never plan on being out after the sun sets, it can prepare you for the possibility of low cloud and fog.  The weather can always change, as we discovered on our Helvellyn walk where we started with lovely sunny day and ended with visibility of about 15 – 20 metres.  And there is always the eventuality of spending longer in the hills than anticipated.  Better to be prepared.

The night of the course arrived and we set off before sunset from the car park at Honister Youth Hostel, climbing a stone pitched path up the fell side.  But before we left, we reviewed the map, using the features around us to ensure that we were indeed setting off on the path that we intended – a good bit of revision.  I was feeling pretty tired that day, and it reflected in my walking.  By trying to keep a quicker pace, I found myself stumbling over the rocks.  Chris reassured me that we had plenty of time and slowing down to walk more safely would be the better option, for which, I was really thankful. 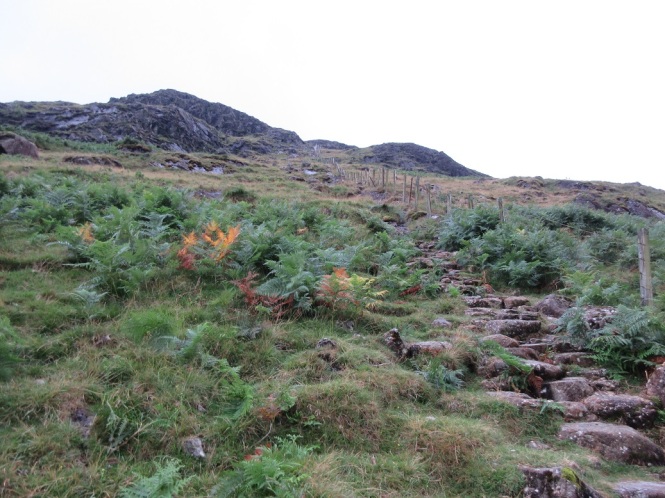 After a while, we paused to admire the views from our elevated position on the hill side.  The sun was setting and a beam of red cast its gaze over the fells like Sauron’s eye scanning Mordor for the one ring to rule them all.  Luckily, we weren’t on Mount Doom, but the light was beginning to fade and things were going to get exciting!

As we continued along the path, we reviewed the map and landscape – the hummocks, the man made features, and I was able to have a go at pacing to a point on the map.  Chris was on hand with advice about the best way to measure to try to eliminate errors and I did pretty well at getting us to where we needed to be.

Now it was getting dark and was time for the real work.  We were going cross country to try and pick up a track across the fell side from where we were.  Memories of the Slaughtered Lamb from American Werewolf in London came flooding back – “Beware the moon, stay on the path”.  I was a little scared, but mostly really excited.

Using head torches to look at the map, we reviewed the options that were available to reach our destination, including taking a bearing and contouring.  We could see that the path lay on the same contour line as the one we were currently on.  In theory, we could walk this contour all the way to the path, which would mean trying to stay on the same elevation as we walked along.  However, I soon discovered that contouring was not one of my strong points (I don’t think the hummocky landscape helped), so we looked at other ways to get across the fell side safely.  This included relocating our position using map and compass witchcraft, also known as triangulation.  I was suitably impressed as we began walking toward the path, now using a compass bearing

It was dark by now and looking up, there were so many stars.  The Milky Way was visible, and as I watched, I spotted two shooting stars racing each other across the sky.  It was a truly magical moment.

The clear skies didn’t last for long though.  As I was practising walking on a bearing to reach the elusive path, the cloud rolled in and our visibility was reduced to around ten metres.  Finding something in my line of sight to walk towards was becoming increasingly difficult.  I was having to really concentrate, now focusing on blades of grass as the distance I could see was significantly reduced.  This was when Chris hit me with the question – do I think I might have walked over the path without noticing?

There is so much to think about when you are navigating in the dark.  I was so focused on staying on my line, I had no idea how far I had walked since leaving the original path.  I should have used all the information available to me, including measuring the distance.  Maybe the path was faint.  Maybe I had walked over it.

We decided to continue on for a while. Of course Chris knew it was fine to do so, but had I been on my own, there would have been massive doubts creeping in.  This was certainly a lesson learned for me.  Chris explained some ways to speed up the walking on a bearing process, and soon, there was a path under my feet.

We checked the maps and went to discover some of the features in the area.  Chris continued passing along his gargantuan knowledge of all things navigation as we explored and I practised techniques I had learnt.  I was finding the whole experience thrilling so when a bothy popped up, seemingly from nowhere, I became a bit unsettled.  I had recently watched The Ritual, a British horror film about four mates lost in a Scandinavian forest – well, if you’ve seen it, you’ll know what I mean. 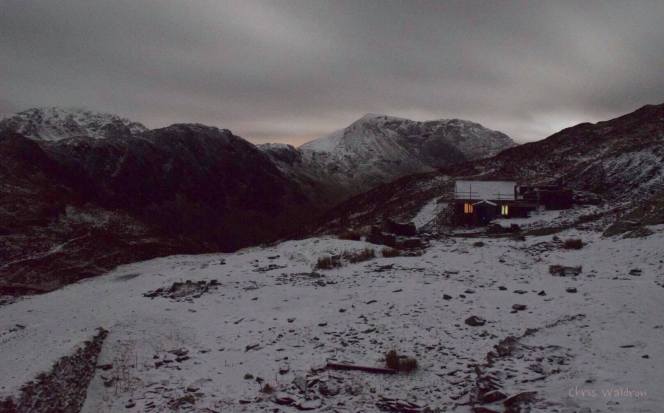 I mean look at it.  Looks beautiful in this photo – welcoming and warm, but being out in the dark seemed to have heightened my senses.  And my over active imagination too. (Thank you to Chris from OookWorks for the photo)

From here, it was time to make our way back to the car park.  Some of the earlier low cloud had cleared and as we strolled along, the moon appeared, bright and ethereal, lighting the way and reflecting in the puddles on the ground.  It was a stop you in your tracks moment, and the terrible photo opposite really does nothing to show how amazing it was.  But still – beware the moon.

When got back to the car I was tired, but still really excited and feeling pretty accomplished and more confident about what I can do with a map and compass.  And for all the adventure they can bring, I now love maps even more.  If you fancy improving your navigation skills, or maybe trying a wild camp adventure, have a look at Chris’ events page.

6 thoughts on “Navigation – For the Love of Maps”