On Saturday we decided to take the dogs somewhere we could let them off the leads and let them have a big run.  Rocky loves the seaside, getting his paws wet and splashing about in the surf whereas Pebble prefers mooching and sniffing around, so we chose to visit the National Trust site at Formby.  That way we could take in a woodland walk and stroll down the beach at one location, and maybe spot a red squirrel in the process.

We arrived at Formby around noon and the car park was almost full.  In the summer months, the car park can fill up earlier at which point the site operates a one in one out policy so the queues can be quite long.  At this time it is worth getting there early or checking their social media pages to confirm the parking situation. 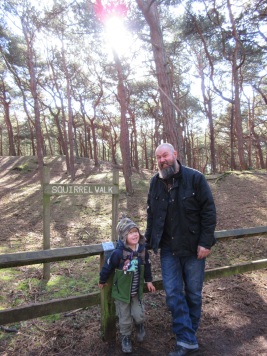 We parked up by the beach and walked back to the entrance to make our usual toilet stop then opted to stroll round the squirrel walk first.  That way, any muddy paws could be washed off in the sea before getting back into the car.  We made our way to into the trees, Rowan extremely excited about the possibility of spotting Squirrel Nutkin (given his Peter Rabbit obsession).

Red squirrel numbers in the UK are in decline due to a number of reasons including viruses and competition with the grey squirrel, but Formby and the wider Sefton Coast is classified as one of the seventeen red squirrel strongholds in the country, the conifers being an ideal habitat.  Here a number of parties, including the National Trust and the Lancashire Wildlife Trust, work towards the conservation of the red squirrel and the result is that the numbers in this area have been increasing over the last few years.  You can read more about their work here.

It was quite busy so we opted for one of the quieter paths, peering into the trees until we spotted one of the squirrel boxes. We decided to linger here to see if Nutkin would make an appearance, Rick telling Rowan to look out for rustling branches or cones dropping down from the trees.  It wasn’t too long before we were rewarded.  We could just make out a squirrel running along the branches from tree to tree.  I was struck by how red he actually was and Rowan was beside himself with excitement.  We watched him run down the tree trunk and disappear into the undergrowth.  This short sighting was well worth the wait though, unfortunately, I was far too slow with the camera.

We continued into the woods and as the paths and barriers disappeared, we contented ourselves with exploring the trees, cones on the ground and little hollows and tree stumps.  Considering it was a fairly busy Saturday, it was still very peaceful with various birds and the sound of the wind in the trees all we could hear at times.

Whilst we were examining how rough the bark on one tree was, I remembered I had downloaded a tree identification app onto my phone.  British Trees allows you to identify what you are looking at based on the various features.  We based our search on the needles and after answering a number of multiple choice questions, including pictures to help us make our decision, we were told that the tree in question was a Larch.  Rowan really enjoyed deciding which picture to choose when answering the questions so I think this will be making an appearance on future walks.

We continued making our way through the forest towards the beach, discovering all manner of interesting things.  Rowan really liked a den we found at the top of the mound whereas I liked gnarls of the dead tree we came across.  Rick, who really looks forward to spring, was excited to spot the patch of snowdrops and we all enjoyed watching the buzzards’ aerial acrobatics. 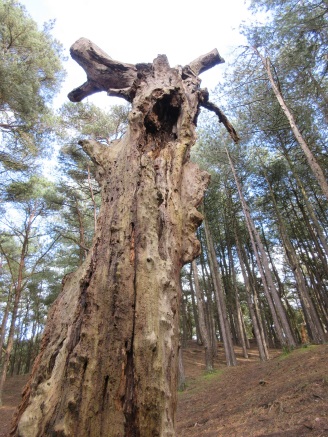 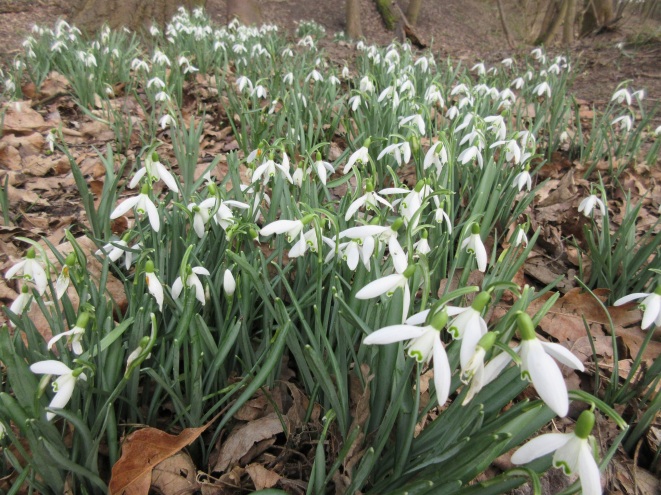 Our forest stroll took us back to the car park where we dropped off Rowan’s collection of various twigs and pine cones at the car and continued down to the beach.  Here we found that the tide was pretty much in so the normally wide expanse of beach was limited to a narrow corridor of sand which made it feel much busier than it actually probably was.  However, we were still able to let the dogs wet their paws in the sea and enjoyed the open views out to sea. 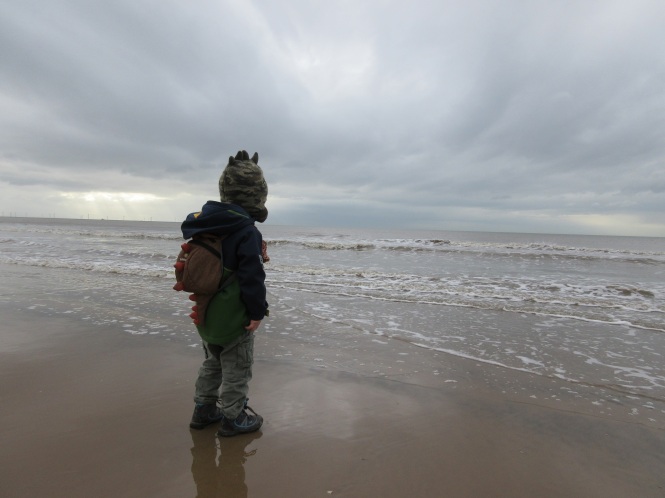 The dunes and beach themselves were showing effects of the recent storms, with the dunes being extremely steep in places and some bricks and paving slabs being uncovered on the shore.  Formby is one of the UK’s fastest eroding dune systems which at first sound like a bad thing, but in actuality is a natural process that creates new habitats for wildlife.  The sand is deposited further north on the Sefton coast creating salt marsh homes for rare creatures such as Natterjack Toads, Sand Lizards and Great Crested Newts.  You can find out more about the wildlife, processes at work at Formby on the National Trust website here.  There are also details of events including the Formby Footprints Walks with archaeology experts, looking for prehistoric footprints left by man and beast thousands of years ago – something for us to do next time we visit.