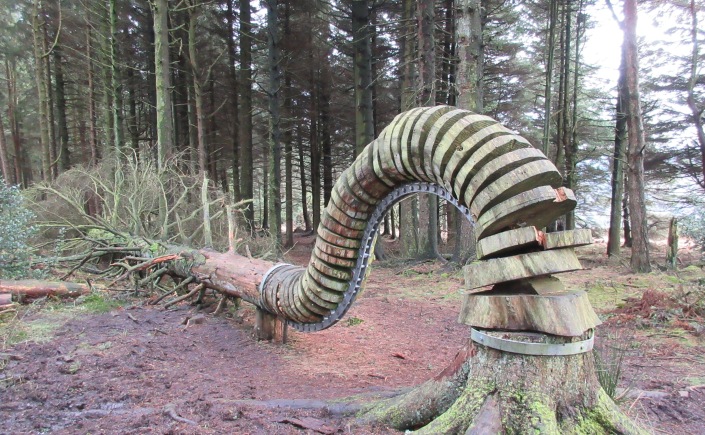 Our latest adventure took us to the village of Barley in search of the Pendle Sculpture Trail.  The sculptures, created by four different artists, were inspired by the history and people of the Pendle Witch Trials of 1612.

We arrived at the car park by Barley picnic area much later than anticipated.  The forty five minute drive had turned into around an hour and a half due to an average speed on the M60 of about ten miles per hour and as such, I was feeling slightly frazzled.  This feeling only increased as Pebble began her Sweep from the Sooty Show impression in the back of the car (she likes to make sure I don’t forget she is there) as Rowan lamented on how his boots weren’t the same.  Trying hard to stay calm, I attempted to block out Pebble’s ever increasing whining squeaks whilst I got to the bottom of Rowan’s not the same, yet identical boots.  Turns out, the loops on the bows weren’t of equal size.  Rowan’s boots sorted out to his satisfaction, we paid the parking fee (£1 in an honesty box), visited the toilets, collected the dogs and set off on our way. 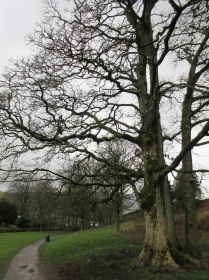 It was an overcast day with a bit of drizzle in the air, but we were undeterred and as we entered the picnic area next to the car park, looking at the trees and crocuses, I could already feel my mood beginning to lighten.  Thinking back to Rowan’s distress over his non matching boots I remembered that I was like this as a child.  My socks had to be pulled up right to my knees, and turned over exactly the same on each side.  I’m not like this now – far from it – but I find it amazing that Rowan has little behaviours that he seems to have inherited from me even though he hasn’t seen them.

Our route took us through Barley village, 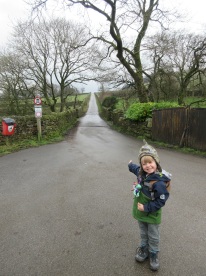 towards a private road leading upwards with Lower Black Moss Reservoir on our left and Stang Top Moor on our right.  We stopped to watch the sheep in the surrounding fields, then examined the map on my recently purchased subscription of OS Maps online.  We looked at the blue for the water of the reservoir, the line of the path we were on and the green of the wood we were heading to.  Rowan seemed really interested and wanted to hold the “map”, but I drew the line there, not wanting my phone to end up in a muddy puddle or pile of horse manure.  Instead, I resolved to print a mini map out for him next time, a feature that comes with the OS Maps subscription and I know will make him feel even more like the adventure leader. 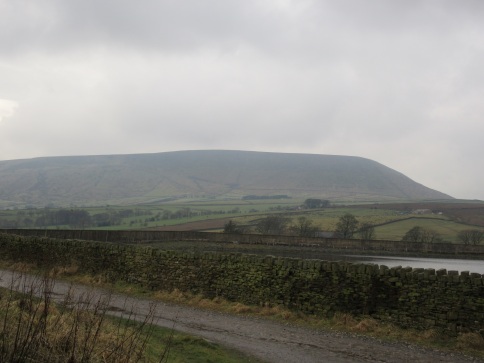 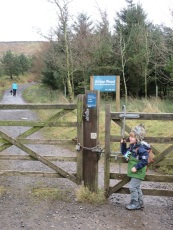 the right hand track, passed through a gate and continued on until we reached the entrance of Aitken Wood.  Here the path rose steeply into the pine trees, the smell of Christmas all around us.  Looking back we could see the bulk of Pendle Hill – a walk for another day for sure. 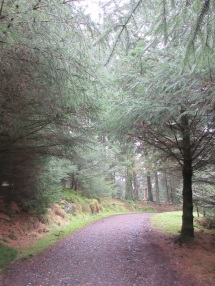 The sculpture trail started as the ground levelled out, so after a sandwich, we started exploring, the path enticing us into the trees.  We looked at the hollows in the tree roots, cobwebs and burrows, wondering what animals may live there.

I find forests to be magical places at the best of times but the addition of the sculptures and plaques only added to the mysterious atmosphere.  Rowan was excited to discover what pictures were on each ceramic plates, running up to each of them full of curiosity.  His favourite showed a rabbit (being the huge Peter Rabbit fan that he is) whereas I preferred the sheep skull (obviously the skull, being the huge heavy metal fan that I am). 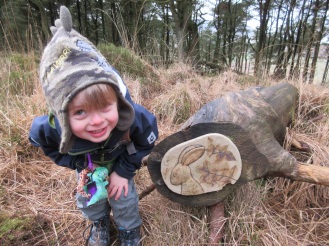 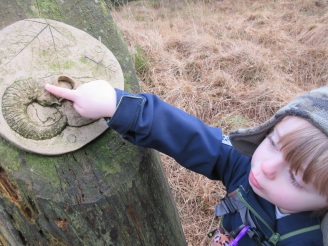 The sculptures themselves are made from steel, stone and wood and are fascinating, intriguing and for Rocky – downright scary.  Creeping round one corner, we came across the wonderful, life size carving of a witch finder which promptly sent Rocky into full on protect my family mode, relentlessly barking at the wooden statue.  Maybe he was a witch in a former life.

We managed to drag him away and continued our search.  Some of the pieces cannot be missed such as the arches in the picture below whereas others take some looking for.  I think part of the beauty of this trail is that it really encourages you to look around and explore in a way that you might not if you were simply following a forest path. 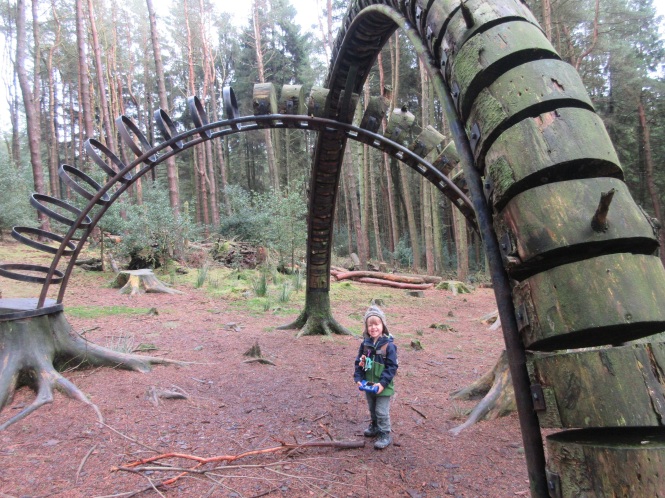 All in all, we spent about two hours discovering Aitken Wood.  I was pleased to see that Rowan continued to be un-phased by mud and watching his confidence, curiosity and sense of adventure grow was an absolute delight.  At the end of the trail, we spied a ladder stile scaling a tall dry stone wall.  We went to investigate and were rewarded with far reaching open views of the Lancashire countryside. 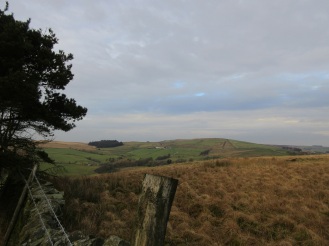 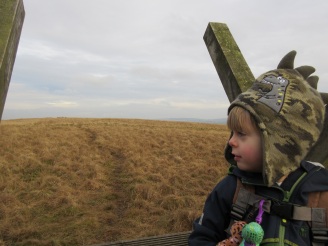 Returning back to the trail we continued on until it looped back round to where we had eaten our sandwiches then followed the path down to the reservoirs and back to the car.  We’d walked just over three and a half miles and climbed around 120 metres, taking just over three hours.  There were ten plaques and fifteen sculptures to find in all – details of which, including a map, can be found in this here.  The leaflet also explains that each of the plaques relate to one of the people involved in the witch trials, making it a really interesting accompaniment to the walk.  I didn’t know about this before we left, so we didn’t find everything, but we made a pretty good job of it and had a really fun day out in the process.