Standing at 290 metres, Castle Crag is the smallest fell in Alfred Wainwright’s pictorial guides.  However, what it lacks in height, it more than makes up for in character.  I’ve walked up Castle Crag a few times, and know how lovely yet interesting it is, so when my Mum decided to join me and Rowan for her first Lakeland hill walk, it seemed like the perfect choice.  And given that the route I’d planned took us to, what Alfred Wainwright described as, the loveliest square mile in Lakeland, we were in for a brilliant day out.

We decided on a circular walk from Grange.  The pretty, little village has limited parking, so we made the most of our National Trust membership and left the car at their Great Wood car park on the B5289 (CA12 5UP will get you close by).  From here, we took the number 78 bus down to Grange.  Crossing the bridge, we passed a tea shop then turned left, following a fingerpost indicating the way to Seatoller and Rosthwaite. 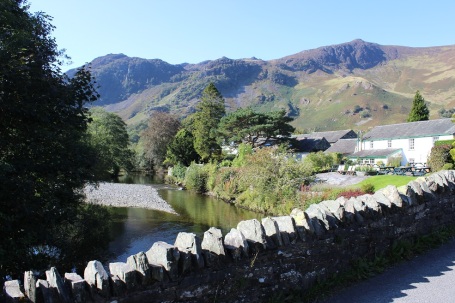 Walking down the tree lined lane, we caught sight of our little summit and its densely wooded slopes.  It didn’t seem too far.  We continued along the track till we reached another signpost and another left turn.  Castle Crag was one and three quarter miles away, so not far at all.  Maybe would be making use of the tea room before we caught the bus back, I thought, as we stopped to say hello to a horse in the field.

Dappled light played on the gravel track and as we walked past a campsite, I made a mental note that it was in an amazing location and we should definitely come back for a visit with Tormund the Campervan.  A few minutes later, we reached the shores of the River Derwent, looking peaceful and serene, surrounded by the green of the trees, moss covered knolls and clutches of bracken.  We were beginning to see what Alfred Wainwright meant – what a welcoming spot, perfect for a lazy day relaxing or curious exploration.  Crossing a little footbridge, we took the right hand, cobblestone path which led gently upwards, through the trees. 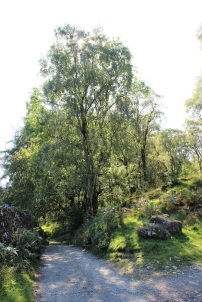 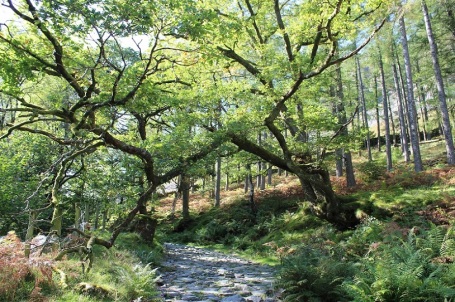 We reached a gate and passing through, emerged from the shade into bright sunshine and started to trudge upwards, taking it easy in the heat.  Looking back, we could make out the ridges of Blencathra (I seem to spot this one from so many places in the Lakes – it must be the shape) and all around us were signs of the former slate quarry works.  It was at this point that Rowan decided, despite the warm September sun, that he needed his gloves – they were to help him get up the rocks.  It seemed to work for him too, so why not. 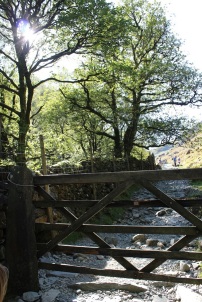 The rugged bridleway climbed steadily through this amazing landscape, with feathery pine tops, lichen covered boulders strewn to the sides of the paths and hardy, windswept trees sprouting from rocky outcrops.  A couple of times, we stood to the side to allow mountain bikers to pass, taking the opportunity to have a drink as they made their bone shaking descent. 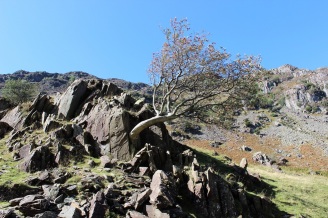 Had we stayed on this track, we would eventually arrive in Seatoller, but as a little stream met the path, we turned left to start the real hard work – the short, sharp hike to the top of Castle Crag would cover over 100 metres (around a third of the total ascent) in a quarter of a mile.  Slow and steady was the order of the day for our three generation group, as our little adventure leader clambered through the gap in a wall. 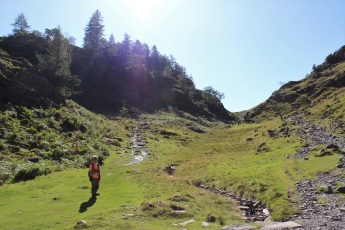 But even adventure leaders get tired, and Rowan took full advantage of the memorial bench, taking a break in the shade of the trees.  The seat was placed in commemoration of Sir William Hamer, and it was in his memory that the land surrounding Castle Crag was donated to the National Trust.

Legs rested, we continued on, up slate steps, through slate walls and meandered past tall trees until we were faced with our next challenge. 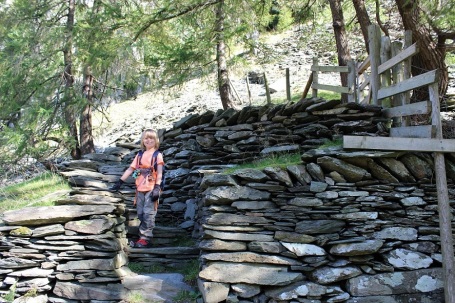 At first glance, the huge heap of slate seemed insurmountable but, on closer inspection, it was possible to make out a path zig zagging its way to the top.  A slightly treacherous looking path, but a path nonetheless.  We carefully made our way up, keeping an eye out for people coming down and making sure we gave them enough room to pass.  With each footstep, we could hear the chinking of slate being disturbed but it wasn’t half as bad as it appeared and we soon found ourselves at the top. 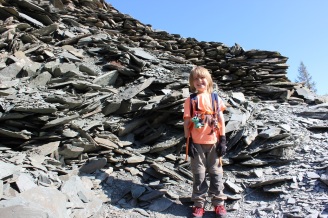 We hadn’t yet reached the summit though – rather, the remains of an old quarry.  The place was really intriguing, and the views were amazing.  Surrounded by green fields, was Rosthwaite, and behind that, Eagle Crag and Rosthwaite Fell.  We wandered round the old workings, finding so many standing slates and mini sculptures, which gave the place a mysterious and slightly fragile looking quality.

After poking around for a bit, we decided to head on.  Alfred Wainwright commented in his guide that one man with a stick could defend the summit of Castle Crag against any number of invaders, and this would still be the case today.  We made the short scramble up the only route to the top – a steep, narrow path, crossed with gnarled roots, using the tree trunks as hand holds, before it levelled out again. 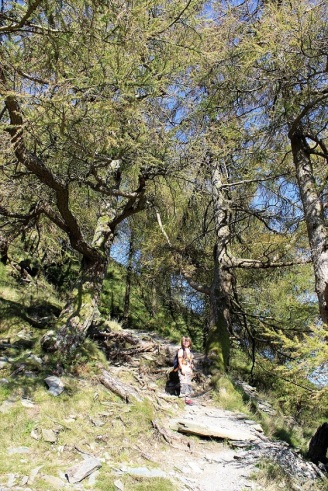 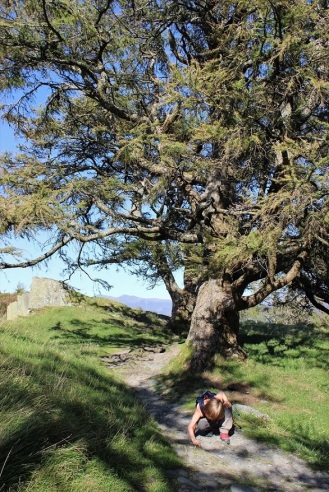 As we stepped onto the grassy plateau that was the top of Castle Crag, the views opened up before us.  To the north, the Skiddaw range stood proud at the end of Derwent Water, with Keswick nestled beneath.  To the south, our previous path snaked across the fellside towards of Seatoller, with Great End and the Scafell range in the distance.  We found some rock seats to sit and eat our dinner, but not before a summit photo. (Note to future self – photos with the sun behind me makes my elf ears glow!) 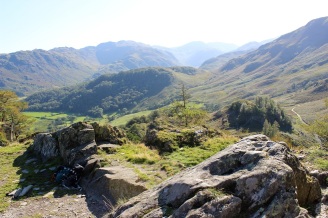 The top of Castle Crag also has a large rocky mound, topped with a circular cairn (we didn’t get a photo as we didn’t want to disturb the people having their dinner). Fastened into the rock is a memorial, stating that Castle Crag was given to the National Trust in memory of John Hamer and the men of Borrowdale who lost their lives in the First World War.

Once we had eaten, it was time to make our way back down.  We returned by the route we had come, back through the trees, where Rowan gave us his best jaguar impression before we reached the slate zig zags, which possibly looked scarier from the top… 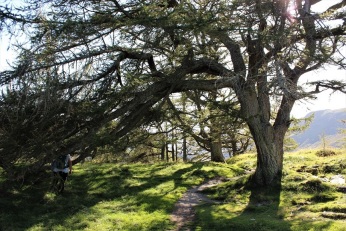 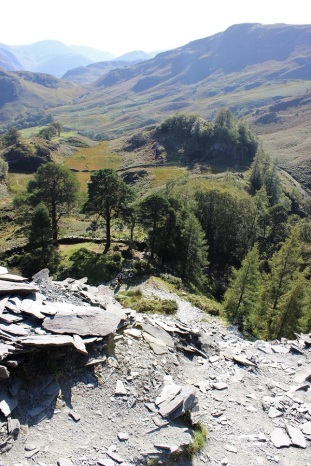 We managed to make it down without the use of our backsides, ignoring the small pieces of slate rolling down ahead of us.  Once down, we strolled to a wall to find a ladder stile that would begin our return route to Grange.  Climbing over, we were greeted with another gorgeous view to Rosthwaite, with the imposing Eagle Crag standing defiantly in the middle of the valley beyond and the slopes leading to Great Crag on the left. 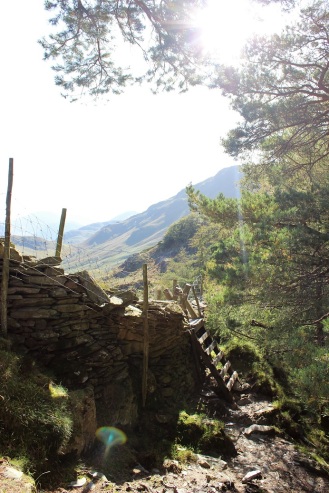 The September colours were amazing as we walked through the green-gold bracken to pass through a gap in the wall. 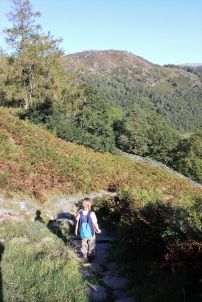 From here, it was a steep descent to the valley below, particularly so as we passed through a small wooded area, giving a bit of everything for my Mum’s introduction to the Wainwright’s.  Once down, the path levelled out again – much to the relief of our knees, and soon, we found ourselves under the cover of the trees – much to the relief of my glowing elf ears.  It had been one of those days where the heat had really taken it out of us. 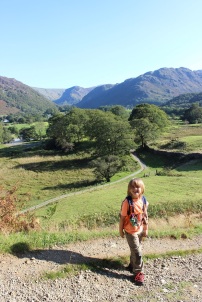 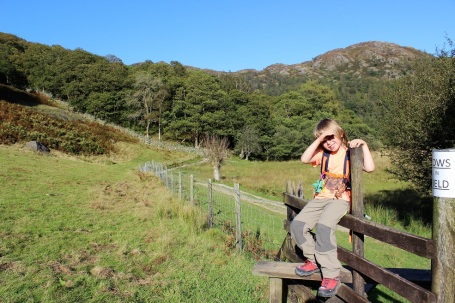 It was now relatively flat walking back to Grange, passing lots of evidence of the area’s industrial past, as well as plenty of tree creatures to get the imagination going.

In among the quarry works, it is possible to find Millican Dalton’s cave (no relation to Patrick Swayze’s cooler, John Dalton from the Double Deuce).  The “Professor of Adventure” left his job as an insurance clerk in London, to embrace a simpler life, spending his summers in the Lake District living in a cave on the side of Castle Crag, offering adventure trips and mountain guiding in exchange for food and cigarettes.  He sounded like an extraordinary character, and I had planned on taking a little detour to find his cave.  However, as we reached the point where I thought we would need to climb up, we were all feeling the efforts of the day.  Conscious that I wasn’t 100% sure of the location, and that once we had finished the walk, we had a bus to catch, then a drive back to Manchester, we decided to press on and leave the exploring for another day. 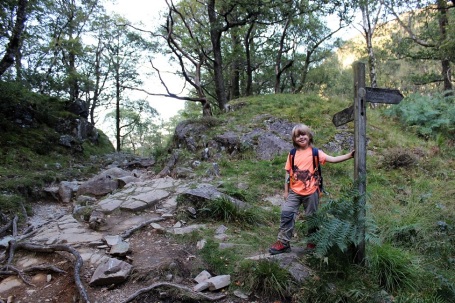 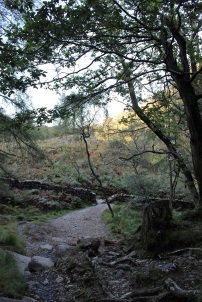 The walk back to Grange was rugged in places, but always magical. Eventually, we were alongside the cool, calm River Derwent which we followed back to the footbridge from earlier in the day, then the short stroll back to the bus stop.  The walk had been four miles, with just over 300 metres of ascent – you can find the route we took here.  We didn’t get back in time for the tea room, but we will be back, as soon as national lockdowns and tiers allow, with a stove, some food and no particular plans except for exploring this lovely square mile of the Lake District.