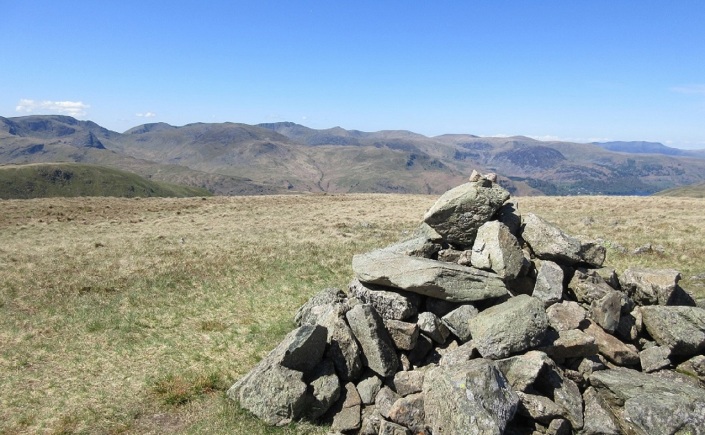 Around nine months after first walking the Kentmere Round, I found myself back in the South Lakes ready to walk those hills again.  This time, I was with Sarah and her gorgeous rescue staffie, Chester, a.k.a. Chester the Adventure Dog.  On my first wander over the Kentmere Round, Kathryn and I added in High Street (the route of which you can read in more detail here).  Today, we would follow more or less the same paths, except instead of High Street, we would add on Gray Crag instead.

We phoned ahead to make sure the field in Kentmere was open for parking (details here) then set off early to ensure a space.  Arriving in Kentmere around 8:30, we bagged the first parking spot, paid the £3 fee in an honesty box, then set off down the road towards St. Cuthbert’s church, the blue skies overhead promising a beautiful day. 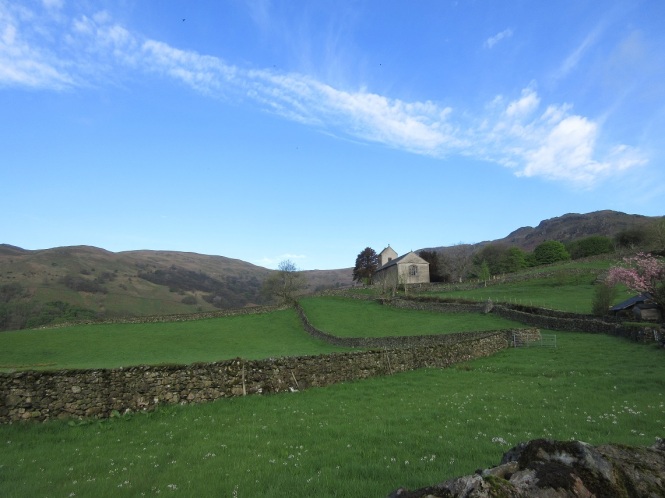 Sarah rescued Chester just over six months prior to our day out.  Previously, he’d rarely been out walking, so Sarah has gradually built him up to the mountain machine we see today.  He loves being out in the hills and he showed us how keen he was straight away, powering up the Garburn Pass with his big staffie smile on his face. 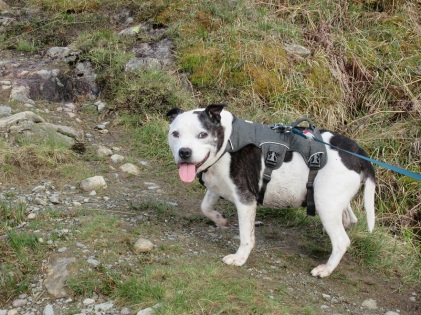 Trying to keep up with Chester meant it wasn’t too long before we reached the crest of the Garburn Pass.  We turned right to head up a grassy slope, which became steeper and gravelly underfoot as it led us to Yoke, the first summit of the day.  From the summit, we could see our next target, and one of my favourite fells so far – my Ill Bell.  Chester was keen to get there, so after the obligatory photo, we followed our furry guide along the ridge. 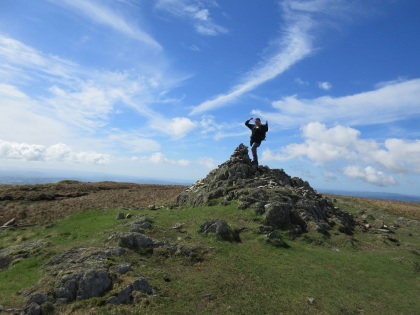 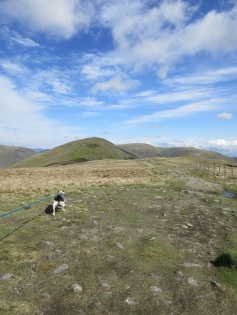 The ridge between Yoke and Ill Bell give lovely views down the Kentmere valley.  This time however, we noticed the reservoir had been drained.  This was prior to the really dry weather of 2018 so I am unsure as to why it was empty.  Google seems to suggest annual maintenance.

Soon, after some descent and re-ascent we found ourselves on the intriguing top of Ill Bell.  I may have mentioned a few times before that I love this summit.  Its steep sides give it a really airy feeling – a proper mountain top.  The impressive cairns and rocky plateau capture my imagination, giving rise to all sorts of tales in my head – full moons, dragons, solstices…  And the views are amazing.  This is a place I know I will return to again and again.

After a sandwich and cup of coffee, we set off along the ridge.  Froswick and Thornthwaite Crag could be seen ahead of us, but first we had to negotiate the steep climb down from Ill Bell – Chester’s no fear attitude meant he made much quicker progress than me.

The glorious blue skies were holding out for us as we made it to the top of Froswick.  Thornthwaite Crag and Stoney Cove Pike dominated the skyline, with the Helvellyn range poking up behind.

A clear path now led us to the next summit on our route – Thornthwaite Crag.  So far, we had only encountered a handful of people but the fells were getting a little busier now.  This probably isn’t an issue for most people, but Chester, like Rocky, is a reactive dog.  Unlike Rocky, who is fearful of people and dogs, Chester loves the two legged variety so we had had a pretty easy day on the reactivity front so far.

Reactivity can happen for lots of different reasons – fear, excitement, genetics etc.  Prior to his life with Sarah, Chester hadn’t been out too much, and as such, is still getting used to this new and exciting world that has opened up to him.  The result can be reactivity and other dogs can be one of Chester’s stimuli. Chester isn’t really bothered whether the other dog is friendly or not – he can still react with barking or lunging (just like Rocky) if it all gets too much.

As we strolled along the path towards Thornthwaite Crag, we could see an off lead spaniel, happily running along carrying a huge stick in her mouth – and unknowingly, potential reactivity stimulus for Chester.  Sarah hung back with Chester and I walked ahead towards the dog and her owners.  The cheery spaniel came running over to me for a fuss, so I gladly obliged, keeping her distracted as her owners caught up.  After a quick chat with them about how lovely she was and how I had two spaniels at home, I explained Chester’s situation – an adorable rescue dog, still getting used to the world, but can be reactive.  These brilliant owners had the best possible response.  Despite their spaniel clearly being a very friendly dog, they put her on her lead, wished Chester all the best, and walked past ensuring no contact between the two dogs – the best way to help a reactive dog and their owners.

Not long after this encounter we reached Thornthwaite Crag and its huge beacon, the previous peaks lined up behind.  Another butty and brew, and we were ready to press on. 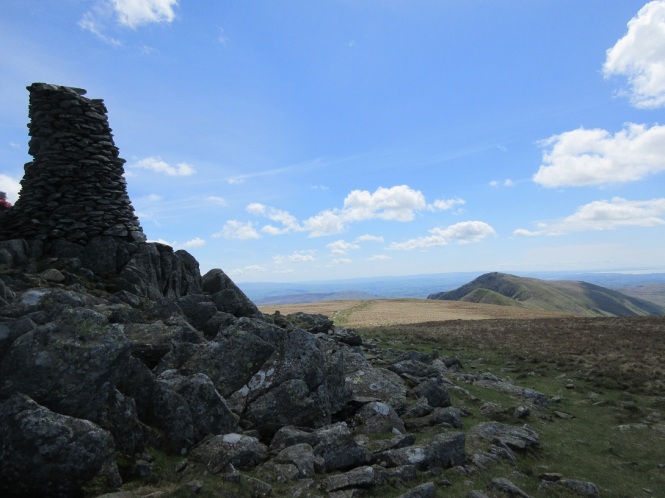 We crossed the wall and yomped down the grassy ridge northwards to reach my first new summit of the day – Gray Crag.  The path was indistinct, but the wide ridge kept us going in the right direction.

Along the way, Chester was enjoying exploring the new terrain.  It was peaty in places, with big boggy puddles.  One such puddle was explored a little too closely.  With a sploosh (this was the exact noise he made), Chester disappeared under the murky water, resurfacing like a little white seal.  Sarah helped haul Chester out, he gave himself a shake and carried on, despite the fussing over whether he was ok.  Of course he was – he’s Chester the Adventure Dog!  But as a warning to others, some of those puddles are a lot deeper than they look.

After crossing some fallen walls, we reached the cairn on Gray Crag’s grassy summit plateau.  There was no one on the fell with us, the blue skies were holding out, the views were glorious in every direction and it was so peaceful.  Another great place to be. 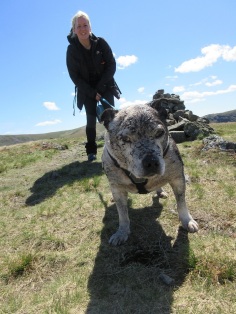 We now had to retrace our steps back to Thornthwaite Crag.  Chester was not impressed with this and he made it very clear.  The whole walk, he had been leading the way, practically dragging us along as he excitedly made his way up the hills.  Now, he had slowed to a disgruntled trudge to signal his disappointment in our choice of route.  He really didn’t like covering the same ground twice.  From my perspective, there was a lot more ascent than I had remembered coming down.  I could sympathise with Chester.

On reaching the Roman road at Thornthwaite Crag, we followed a sometimes wet path round the head of Kentmere Valley.  A little off path scramble up the grassy slope saw us reach Mardale Ill Bell, with High Street behind in one direction and Haweswater Reservoir in the other 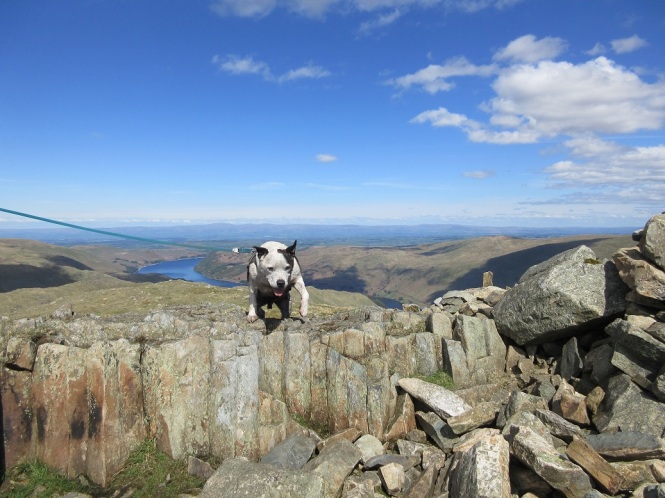 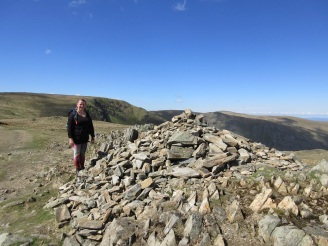 From here, we began the rocky descent to Nan Bield Pass.  The following 120 metre ascent to Harter Fell felt as steep as it looked today, but the views of Small Water and the shadows of clouds on the fells made my wheezing chest worthwhile.

Once the main climb was completed, it was a pleasant stroll to the Harter Fell summit cairn with its protruding iron embellishments, before following the fence line along a clear path, boggy in places and positively wet in others, till we reached Kentmere Pike.

The soft ground was welcome relief after the rocky route that went before, but I was beginning to feel a bit tired.  When we reached the ladder stile at Kentmere Pike, and having visited the trig point previously, I was happy to take a sneaky photo over the wall.

Continuing along the path, we arrived at the ladder stile that I had completely forgotten about from my last time on this walk.  From this side, it looked easy enough for Chester to negotiate with a little help, but I suddenly remembered that on the opposite side of the wall, the stile was about seven foot tall and near vertical.  There was a gate in the wall, which on investigation, we found to be locked.  We had no choice but to tackle the stile.  After a bit of tricky balancing by me to provide a stabilising hand if required, a lot of trust from Chester and some amazing strength from Sarah in carrying a 25 kilo dog on her shoulder down a ladder, Chester was safely over the stile to continue on to Shipman Knotts.  It was at this point we realised in would have been a whole lot easier to lift Chester over the four foot gate. Oh well!

We reached Shipman Knotts in time for another brew and bite of eat whilst we planned our descent back to Kentmere.  Peppermint creams provided a much needed sugar rush.

The last time we walked the Kentmere Round, Kathryn and I had followed the wall from Shipman Knotts over Wray Crag to a track which led to Kentmere.  It had been tough going for tired legs, with use of the bum required to get down some of the rock steps.

I had noticed a path on the map that looked like it might be easier, and even better, had seen the start of it when we walked over the grass from the stile to Shipman Knotts.  We decided to give it a try and back tracked slightly, tramping over the long grass to meet the path – the views of the fells we had traversed earlier in the day ahead of us.  A bemused sheep watched cautiously as we went. 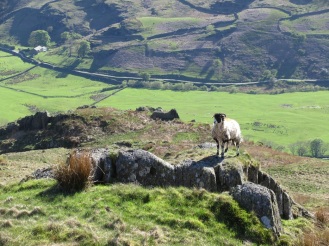 After about five minutes, we had reached the path which led at a nice gradient down the side of the fell. 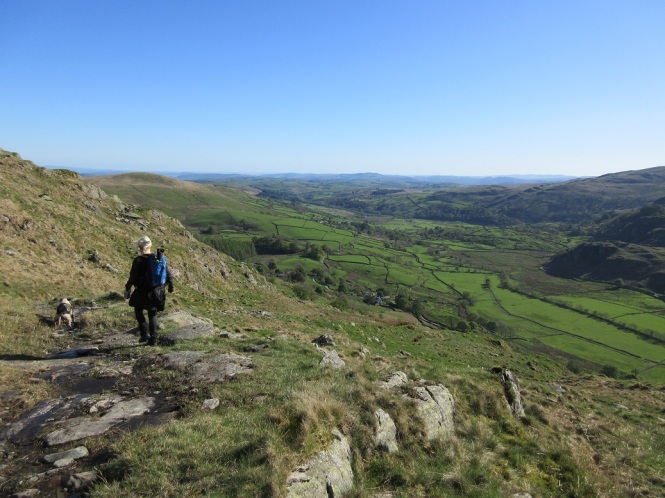 The track took us past some lone trees, seemingly growing out of the rock, and across some narrow streams – a perfect spot for a drink for Chester. 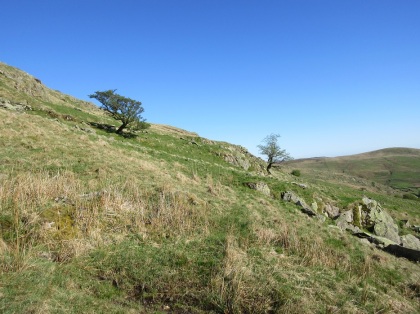 This was a much easier and more pleasant path than the route I had taken last time.  I would really recommend it as good alternative for tired legs completing the Kentmere Round.  We eventually arrived at some buildings and farmer’s fields and from here it was a simple task of walking along the road back to the car park.  Least it would have been easy if I hadn’t missed the turning. Luckily, I realised before we walked all the way back to Staveley and we took a path across a field to arrive back at the car park, tired but very, very happy and so proud of Chester the Adventure Dog!

We covered around 15 miles and just over 1470 metres of ascent during this walk. If you liked the look of this it, or just want to check the easier (in my opinion) end to a Kentmere Round, you can find a map here.

10 thoughts on “Wainwright Walk 8 – Return to the Kentmere Round”