This is the longest time I haven’t posted on my blog, and I’m coming back with a long one.  Things have just been so busy recently, what with sorting out a wedding, updating the boy’s baby room into a big boy room and teaching a handful of yoga classes.  They have all been good fun if a little stressful at times and it has left me with very little time to write up some of the walks we’ve been on.  And whilst those things have made me a little busier, the biggest change to my routine has been down to our furry little woofer Rocky.

Here’s Rocky.  He’s a sweet, gentle dog who always submits to his sister, despite being bigger.  He is loving, goofy and brilliant with Rowan.  He knows if you’re upset and comes over to give you a fuss (usually with a tongue to the face!).  He likes carrots, the sea and running round like a loon if he’s off lead, probably covering four times the distance we walk.  And he falls asleep sitting up in the car on the way home from a day out in the wilds.  Our little furry boy.

Reading my posts, you may have noticed that from time to time, the furry pair can make a nuisance of themselves with barking.  However, on our daily walks round where we live, Rocky’s barking had started to become a big problem.  It started with him barking at a handful of people we passed on our walks.  This began to progress to barking at everyone that passed.  Soon he was barking at people as soon as they came within five metres of us, then ten metres.  Before long, he was barking at people around 20 metres away from us and continuing to bark as they passed, then turning behind to continue barking just to make sure they had gone. 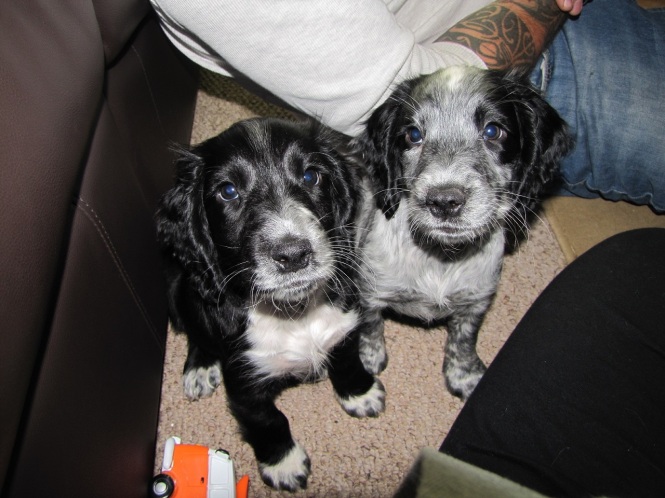 behaviourist to come through.  But our walks had become increasingly stressful.  I was still walking Rocky and Pebble together and Rocky’s woofing had reached the stage where he could start barking as soon as he left the house, at nothing, for the next five minutes.  After this he would calm down, only to start again when somebody came into his view. Occasionally he would lunge.  Walks had become a nightmare with Rocky shouting at the world, me apologising to the world and getting upset, angry or both with poor old Pebble just dragged along for the ride.  I didn’t know whether I should walk him at all, whether I should tell him off or just avoid people completely.  I was no longer happy to go on walks with just me, Rowan and the dogs as we always have.  I felt the potential for something bad to happen was just too high.  I was so upset and worried our Rocky.  The behaviourist appointment couldn’t come soon enough.

All this said, family walks in the countryside were generally fine.  Our walk up Shutlingsloe had no such problems.  I later found out that this was because it was a different “picture” for Rocky – something away from the norm that could eventually end up the same way as our local walks.  In the safety of our house, it was the same old daft, loving Rocky.

When the appointment came through, I was so relieved.  Our behaviourist was a lovely lady and I instantly felt at ease.  Rocky was another matter though.  No amount of schmackos on the floor was going to distract him from barking at this lady.  After a few minutes, we decided that Rocky would be less stressed in the car and we continued the appointment without him.

We talked a lot about Rocky – where we got him from, what he was like as a puppy, what his day is like, how this new behaviour developed.  My first huge relief was that it was unlikely to be anything physical.  Thoughts of brain tumours had crossed my mind, but as he was the same at home as he had always been it was highly unlikely to be something like that.

Rocky was diagnosed with fear reactivity.  I was reassured to hear that this was not down to something we had done.  Some of the most research into dog reactivity has been done by Guide Dogs for the Blind, which makes sense, as they want dogs that absolutely won’t

react.  They have found that the single biggest cause of reactivity is genetics and topping the list of most reactive dogs are the working breeds.  From what I remember, working cockers, like our Rocky are in the top five or ten. It would also be very difficult to pin down any sort of initial trigger as it could have just happened.  The important thing was how we were going to deal with it.

Fear reactivity is a learned behaviour, and without intervention, it gets worse.  In Rocky’s head, strange people and dogs are the bad thing.  When the bad thing comes close to him, he barks, and it goes away.  It doesn’t matter that the person was just going about their business and would have just walked past us anyway, in Rocky’s head, his barking made it go away.  So now he knows that barking works, so to be on the safe side, he starts barking earlier and that works too.  Soon enough, he’s barking at everything that might be a bad thing and every single time, it goes away.  So he starts barking from a greater distance.  And so on.  If I shout, telling Rocky to stop it, stop barking etc, all he registers is that I’m joining in the barking so it must be a really bad thing.

The behaviourist explained our new training regime.  It is called counter conditioning and the idea was not to avoid the bad thing, but to change Rocky’s emotional response to it.  This involves working out what Rocky’s critical distance is – the distance a bad thing is away from us before Rocky starts to react.  At this distance, I cross the road, creating more space for Rocky, making him feel safer.   From here, we stop walking and watch the bad thing.  When Rocky is calm and looking at the bad thing, his face is filled with food and treats and he is praised for being such a good boy.  As soon as the bad thing has passed, treats and praise stop creating a contrast, and we continue on our walk.  Pretty soon, Rocky begins to associate strangers with treats and praise and they are no longer a bad thing.  If Rocky reacts, he is turned away from the bad thing as it’s difficult for a dog to bark at something he can’t see, however much he tries.

We were also advised to make some other changes around the house, like feeding our two dogs separately, letting them sniff out their food and no longer letting them out on the front garden to do their business.  They no longer feel like they have to guard the house when they go out for a wee and they are not worried about the other eating their food.  They have to work a little more for their food, sniffing out where it is, or having it dispensed via a treat ball so they are getting to use the amazing sense of smell that dogs naturally use to feel around the world.  These small changes, easily made, have resulted in two generally much calmer dogs, though we do need to hoover up more.

Rocky now wears a muzzle when we go for walks.  This was the hardest thing for me to

get used to as I didn’t want people to think Rocky some dangerous, vicious dog.  But the muzzle does a number of things.  Firstly, it makes sure that Rocky could never do anyone any harm.  When he is scared, it is impossible to know how Rocky will react, and the muzzle ensures that no nips will occur.  This makes me less stressed as I know Rocky could never do any damage, and if I’m less stressed, Rocky is also less stressed.  It also signals to other people that Rocky needs a wide berth.  It doesn’t matter why they think he needs a wide berth, what matters is he gets some space if possible.  All of this serves to protect Rocky, and once I got my head round that, it was far easier to use the muzzle.  After a bit of training in the house, Rocky took to it no problem and despite what his dog face seems to be telling you (he’s been watching too much Bolt), it really doesn’t bother him.

Rocky’s counter conditioning training has really impacted on the hours I have in my day.  I now have to walk the dogs separately so I can concentrate on the training, and Rocky’s walk generally has been taking much longer, as we spend a lot of time stood at the side of the road people watching (yes, we do look weird).  Hence, less time to write my blog.  The two mutts are so worth it though and there is no way I would be without them. 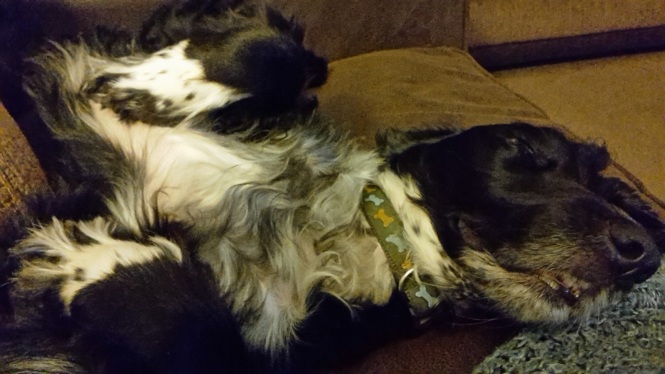 The good news is that it is working.  I still walk Rocky and Pebble separately, but Rocky’s safe distance with people is down to about five metres and he will let people pass within about a metre.  Other dogs are taking a bit longer, and he can still react with some of them, but I have no doubt that he will get there.  It’s all going in the right direction and both of us enjoy our walks so much more now.

I thought for a long time before writing this.  However, at some point in the future, photos will feature Rocky rocking his Hannibal Rockster look and I didn’t want people thinking Rocky was some crazy rabid mutt.  (I’m forever scared by rabies.  Pylons and silos too. Remember those public information films – I’m scarred for life).  Hopefully this post will explain Rocky’s new look.  He’s not vicious or dangerous by nature.  He gets scared, and a scared dog can be unpredictable so his muzzle is a necessary precaution.

I also wanted to highlight that there are dogs out there who bark and lunge because they are scared.  They can’t help it.  And yes, this can be scary for people in the vicinity of the dog without a doubt.  The best thing to do is to try and give some space, walk past ignoring the dog as far as possible and certainly not try to make friends with the dog.   You may also spot “yellow dogs” on your travels.  They could be wearing a yellow bandana, yellow vest or yellow ribbon on the lead.  Some people do this to indicate that their dogs can be nervous and need a bit a space, so if possible try to let them have it.  The owner will be thanking you for it, I promise.

I am in no way an expert on dog behaviour and this post is not meant to try and diagnose problems that other people’s dogs might be having.  What I do know is that seeing the behaviourist has made a huge positive impact on our lives.  We are now seeing benefits of training and our walks are now (mostly) a pleasure again.  I would highly recommend anyone having problems with their dog’s behaviour to talk to their vet as it IS possible to help your dog be happier.

For us, Rocky’s training is working and he’s becoming a happier Rocky Doodle Dawg again.  Let our adventures continue with normal blogging is about to be resumed.