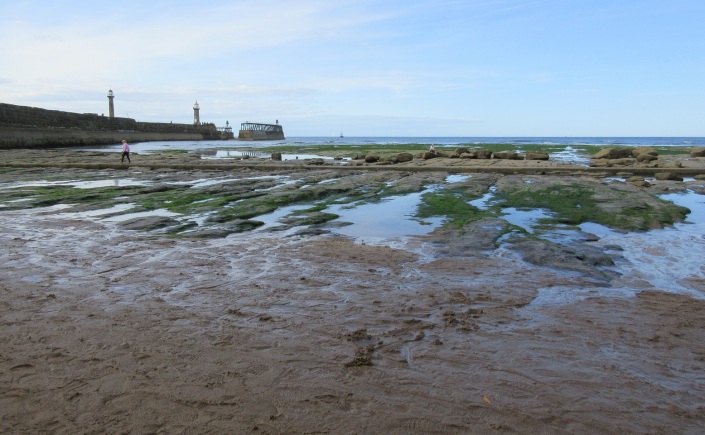 Back in August, I decided I wanted to take Rowan away for a couple of days before he started school.  Rick doesn’t get as many holidays as me, so leaving him at home with Rocky and Pebble, we headed to North Yorkshire and the lovely seaside town of Whitby.  Traffic on the A64 meant the drive took a lot longer than we thought, so we arrived much later than we had planned.  We were determined to make the most of our time there though.  After dropping our things at the bed and breakfast, we set out to explore the town.

Whitby is built up around the steep sides of the mouth of the River Esk.  Narrow cobbled streets are lined by brick and stone houses and shops, and a swing bridge connects the east and west side of the harbour.  Standing on top of the East Cliff is the imposing Whitby Abbey and Church of St Mary.  It is easy to see why Bram Stoker chose Whitby as the setting for the arrival of Dracula, even on this beautiful sunny day.

We picked our way through the narrow streets and passageways, making our down to the harbour.  Rowan wanted to go to the beach, and I had previously read that the east beach was the best for fossil hunting so we crossed the bridge, walked past numerous shops on cobbled streets until we found ourselves on the opposite side of the town.

Walking down some steep and slippery looking steps, we arrived at the first section of beach.  The tide was still out but would be coming in soon, so I wanted to take the opportunity to head over the east pier so we could look for fossils, but Rowan had other ideas.  We were at the beach and this was where he wanted to stay.  And who could blame him – sandy beach with the piers framing the harbour on either side, jutting out to sea. Eventually, I managed to convince him that there was another beach round the corner and that we could look for fossils there, and he reluctantly followed as we carefully climbed the uneven steps up the harbour wall.

The Yorkshire coastline is a rich source of fossils and it is possible to find various ammonites, reptiles and shells, as well as samples of jet.  I wasn’t sure what we would find but it was a lovely spot.  Imposing cliffs loomed above us with signs of erosion from the sea clearly visible.  There were rocks to climb on and rock pools to explore with the lighthouses on the piers standing sentinel.

After a bit of a climb on the rocks, and armed with his exploring stick, we went to look on the rock slabs and in the rock pools to see what we could find.  There were sea snails everywhere, and being careful not to stand on any, we searched among the barnacles.  It wasn’t long before we were rewarded – a fossil on the rocks.  Even though it wasn’t something we could take home with us, Rowan was really excited and continued his search with even more vigour.  Shortly after, a very lovely lady gave Rowan one of her finds – a brilliant ammonite (which is now in his treasure box).  This wonderful lady made Rowan’s day, so thank you!

Keeping an eye on the ever advancing tide, and remembering reading how easy it is to get cut off on this part of the beach, we began to make our way back to the pier, finding a could more half fossils as we went.  Not a bad haul for around an hour on the beach.  I wished we could have got there earlier.

The town looked brilliant, bathed in sunlight, as we made our way back to get some tea.  By the time we had finished, it had started to get late, so we began the walk back to the bed and breakfast.  Back at the West Pier, we came across a pirate ship.  All sailing had finished for the day, so we decided that would be the first thing we did tomorrow.

Then I remembered that The Yellow Boats ran a sunset cruise, and we were on holiday, which meant bedtime could be when we wanted.  We walked back up the harbour to Whitby Coastal Cruises where we boarded the Yellow Boat (details can be found here), wrapped ourselves up in their lovely warm blankets and watched the sun set.  We were also able to see the beach were we had spent part of the afternoon, the strata in the cliffs clearly visible and Whitby Abbey standing proud on top.  A lovely experience to finish off our first day. 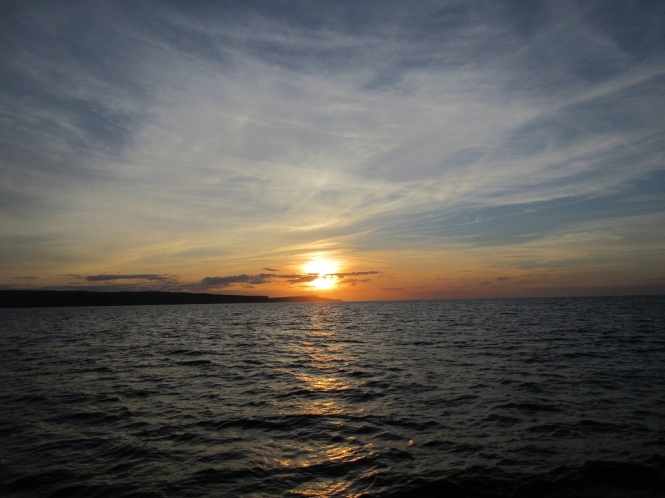