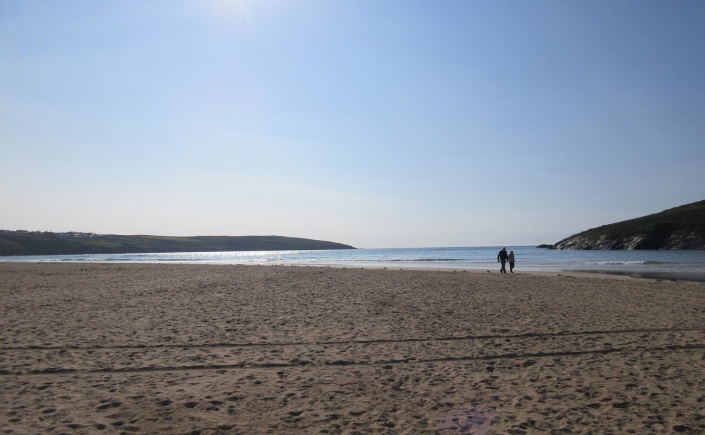 After returning from a week long family holiday in Cornwall with Anma, Gangan and Auntie Kaz, it has taken me a bit to get back into things. Cornwall is a beautiful place, so different to the Lake District, yet with the same ability to make me feel relaxed and at home. The beaches and surf, rugged coastline, big skies and magical place names evoke a sense of calm and peace yet at the same time, adventure and excitement. We had a fantastic week. 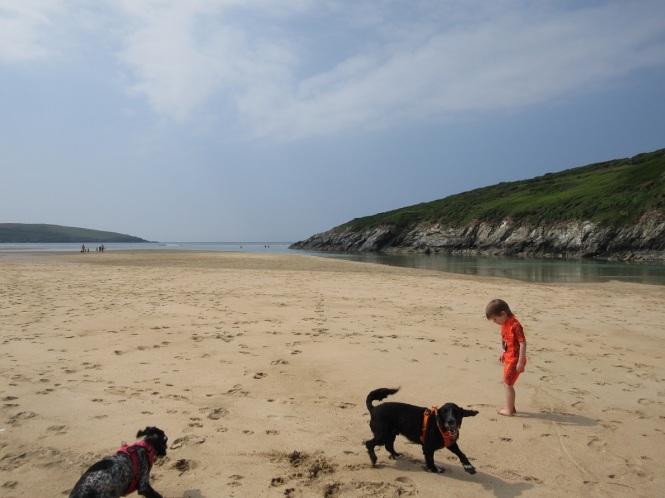 Our first couple of days were spent relaxing on Crantock beach.  The weather was glorious and Rowan wanted to “surf” so it was the perfect way to start the holiday, transitioning from running around in Manchester a more dreckly way of life perfectly. Crantock Beach is looked after by the National Trust so members can park for free. We had forgotten our card so paid £4 for the day but later found out that the parking attendants could have checked our names on the database (something to remember for next time). There is a height restricting barrier put across the car park at around 5pm, but it is quite high – our fiesta with fiesta sized roof box fitting under just fine. The beach is also dog friendly all year round, so perfect for the pack of five spaniels with us, with Uncle Steve’s pooch making six. 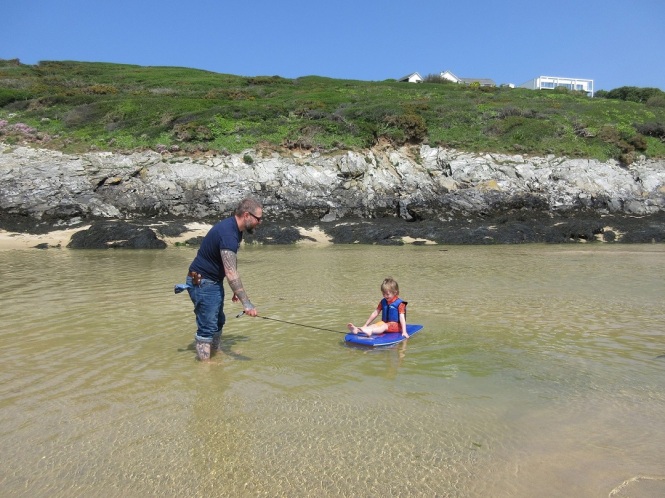 Each day we arrived at the beach the tide was out so we set up our camp alongside the Gannel estuary. It was the perfect spot as we could take turns playing with Rowan in the water or sitting watching the fun unfold. Uncle Steve, who lives in Cornwall, had given us his body board and this was the source of much entertainment for all of us. Rowan used it as a boat to sail across the estuary and a surf board to practise his surfing. I found out very quickly that when I lay on it, it didn’t float happily on top on the water, and the water was very cold! The dogs could run in and out of the water, some more enthusiastically than others. On one of our adventures to the other side of the estuary, with me or Rick acting as tug boat to Rowan on his body board raft, we spotted lots of fish swimming around. The water was so clear. 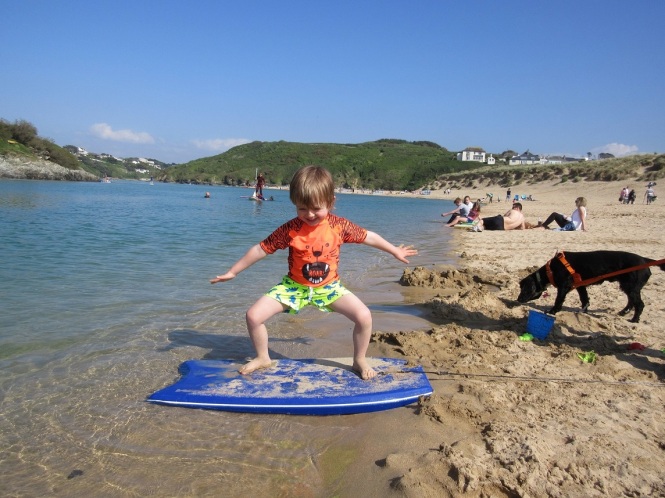 We also ventured on the sea shore with the dogs to jump waves and introduce the pups to the sea and generally splash around. 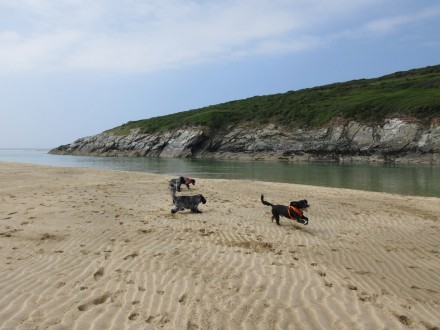 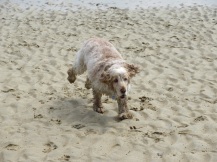 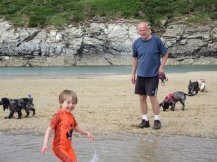 It was at this point we realised how quickly the sea comes in – our shoreline quickly reducing to a little island in no time at all. Something to watch out for in the future. Rick and my Dad had to shout Rowan and me back as I hadn’t noticed that the tide had come in round the back of us. 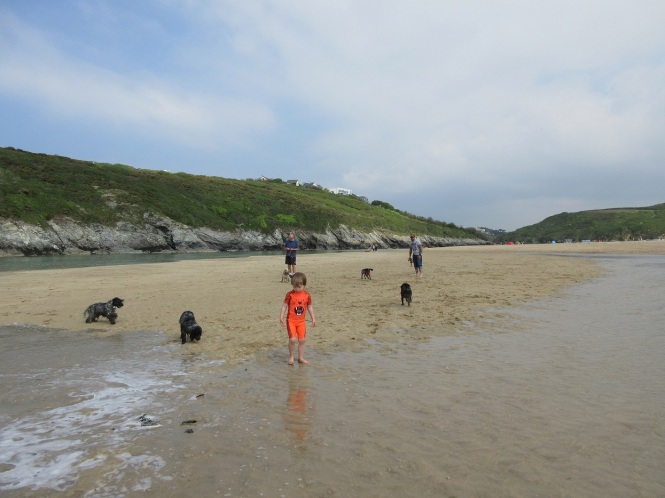 As the sea came in, so the Gannel estuary rapidly filled up. The tide was fast moving. I have never swum so fast when I was heading up the estuary, but swimming towards the sea was like swimming on a treadmill, which again highlighted the need to stay safe and aware. 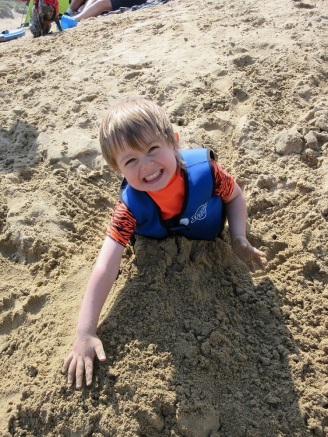 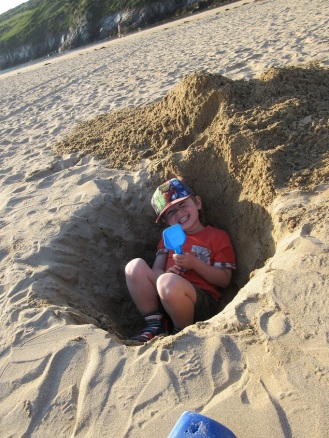 With the tide in, there would be no more playing in the estuary water for Rowan, but that didn’t stop the adventures. There were holes to be dug (and filled in after as it was a monster!), little surf dudes to be buried and relaxation on a blanket to be had. Uncle Steve taught Rowan the magic of building a castle with a moat that actually works, much to Rowan’s delight. The tide came in a bit further the second days, so we had to move a little camp back a couple times but we managed to end the day with a picnic tea on the beach, with no worries about when bed time would be – the perfect ending to two fabulous relaxing days. 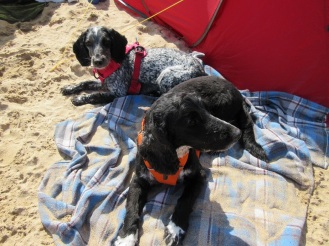 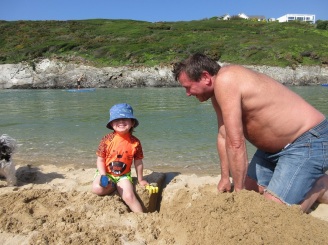 We just spend the two days playing and relaxing at Crantock Beach, but there are sand dunes to explore, a number of walks and a National Trust surf school. You can find more details here.