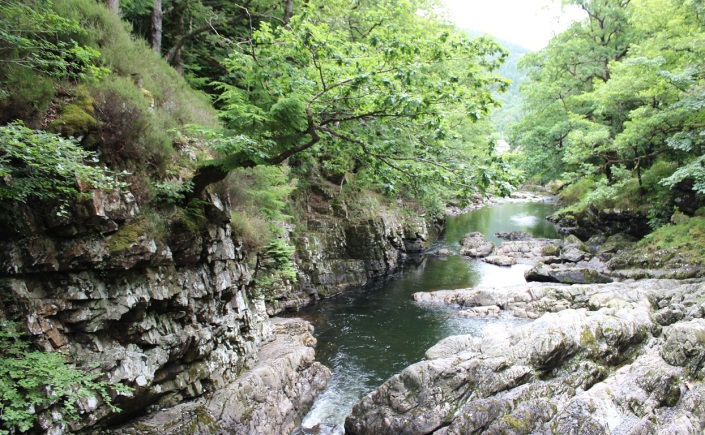 I seem to have been so busy recently I’m just finding the time now to sit down and write about out walk in Betws-y-Coed during our recent long weekend in North Wales.  The forecast for the day was sunshine and rain showers, so we decided to go for a stroll alongside the river, Afon Llugwy, at Betws-y-Coed.  Having visited before, we know that parts of the walk were in woodland, so if it rained, we would be afforded a bit a shelter.

We parked at Pont y Pair car park and paid £3.50 for 10 hours parking, visited the toilets

(after raiding Rowan’s spending pennies for change) then crossed the road to the river and the start of our walk.  The views were beautiful.  The water and greenery all around were instantly calming as we made our way to the boardwalk to venture further into the forest.  As my Mum and Dad have a caravan in North Wales, we have found ourselves in this forest a number of times before.

The boardwalk and flat paths make it ideal for bringing any type of buggy, and the trees, little paths and wooden cut outs of forest animals in the trees make it the perfect place for toddlers too explore.  Now Rowan is a bit bigger, and has a couple of Wainwrights under his belts, my plan was to walk to Swallow Falls, which would have been four miles there and back.  Turned out the afternoon planned out slightly differently. 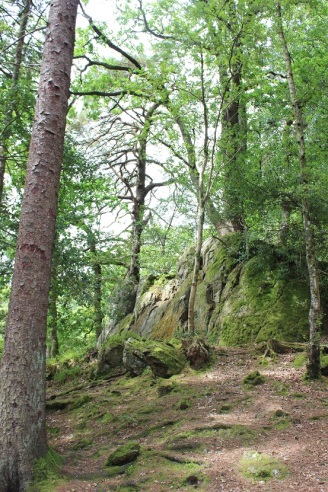 After walking through the forest for about ten minutes, we reached a little dell with

picnic tables by the river and a rocky outcrop just asking to be explored.  After climbing up to feel the moss and look at the cracks in the rock, we walked round to discover a little cave.  Obviously belonging to the Gruffalo, Rowan went up to explore with his Spiderman torch (permanently packed in his rucksack and ready for adventure).  There were no signs of the Gruffalo, so we continued round to the kissing gate.

The pines trees of the forest had now given way to an open field, with sheep grazing and broad leaf trees lining the path.  To our left, the river babbled along – the rocky shore too inviting to not be explored.  Can you spot the dinosaur skull in the river?  (Least that’s what it looks like to me) 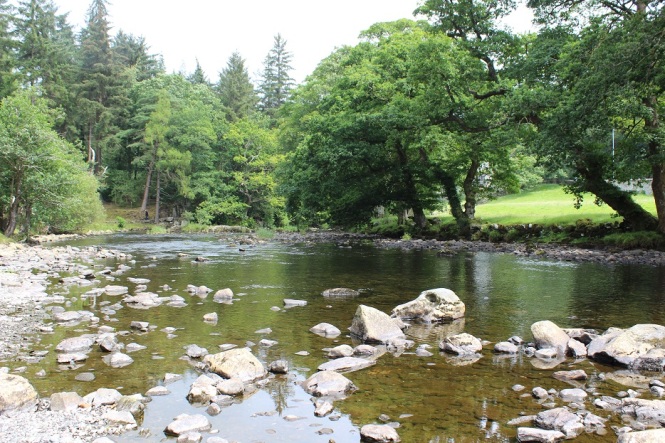 It was a short stroll through this field to cross a little troll bridge before we found ourselves underneath the trees again, this time oak, lime, holly and rowan.  The variety of trees was just lovely, their roots intertwining along the path giving Rowan something to hop and jump along.

I was looking out for the wizard tree, a particular tree that I’d spotted on our last visit that distinctly (to me) looked like a wizard.  Or maybe Treebeard.  But it was no longer there.  There was, what looked like, the remains of a stump, so I guess it could have been cut down or damaged in a storm.  More appealing to me though is that it has taken itself to another part of the forest as a true Ent might.  There is a picture below from our last visit. 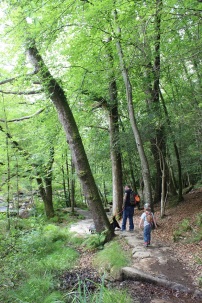 As we passed through another kissing gate, we found ourselves walking along a pitched path leading though the trees and alongside the river.  We were starting to feel a little hungry, so we began to look around for somewhere to stop for our picnic.  Climbing down the river bank, we found the perfect spot amongst the large rocks in the river. 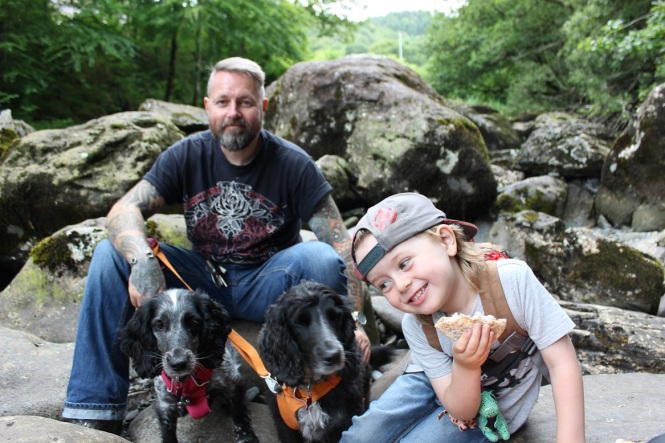 We sat for ages eating our picnic.  There were stones to investigate, spiders to watch.  At one point a heron swooped down and landed in the river beside us, standing stock still looking for fish.  It even started raining a little, a lovely fine mist of rain which just enhanced the experience. 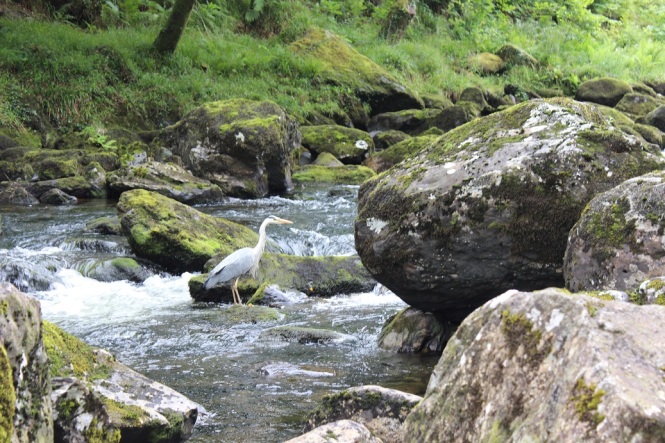 I could have sat there all day but, eventually, we continued along the path until we reached the Miner’s Bridge.  The bridge itself is extremely steep, we gingerly made our way down to admire the views.  Gwydyr Forest was once mined for lead, zinc and copper, and the miners would have crossed here to get to work.  I would imagine it was a bit more precarious then too. 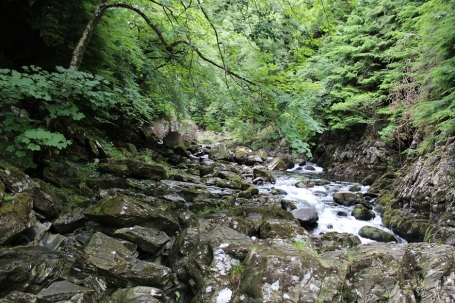 Looking at the map, I realised we hadn’t even covered a mile yet we had been out for over two and a half hours.  It was also at this point that Rowan decided he didn’t want to go any further.  At first I was a little disappointed we hadn’t made it up to Swallow Falls, but Rick reminded me that we try to let Rowan be the guide on how far we walk.  That way he doesn’t become disheartened on a forced march.  And anyway, we’d had a lovely day exploring and a lovely picnic by the river so we started to make our way back to the car park.

One of the good things about an out and back route is you get to spot the things you missed on the way up.  One such thing was a fallen tree.  Looking at the exposed roots, you could see where the tree had grown round and picked up rocks as it grew.  This fascinated Rowan for a while, then it became a climbing frame. 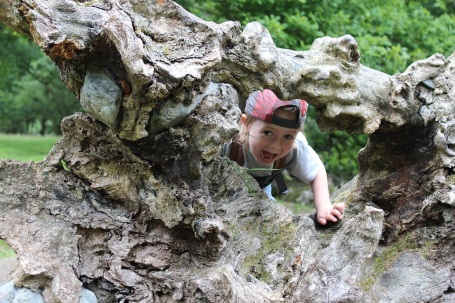 At some point we will return to walk to Swallow Falls, but this day out served as a good reminder that the journey is just as, if not more, important than the destination, and our journey today was lovely.

And if you’re in the area, and liked the look of this walk, why not try this family friendly adventure in the mountains, a few miles down the road.

10 thoughts on “Betws-y-Coed – The Miner’s Bridge”