After a five year break, it’s my second Wainwright walk in as many weeks, this time with the whole family. As Rowan has been not just managing, but truly enjoying every walk we have been on, we decided we would make the drive to the Lake District so he could tackle his first Wainwright. Black Fell (with its very heavy metal name) was to be our destination, chosen for its diminutive height yet fabulous views, with a South Lakes location making for an easier drive from Manchester.

We started our walk from the National Trust car park at Tarn Hows. Tarn Hows was originally three smaller tarns, but a damn built in the late 1800s created the larger lake that can be seen today. This beautiful spot is an ideal place to take the family. The two mile accessible path around the lake is suitable for pushchairs and it is possible to borrow an all-terrain tramper for anyone with limited mobility. This way the whole family can enjoy being outside, surrounded by nature and the fells, regardless of physical ability. Details can be found here

When we arrived at around 10:30 there were still a number of parking spaces available, but it was beginning to get busy. I would imagine in the summer, the car park would fill up much faster. We visited the toilets, its grassy and flowered roof fascinating Rowan, then set off towards the lake. From our viewpoint looking across the lake to the hills in the distance, we could just about make out our destination peeping over the tree line. 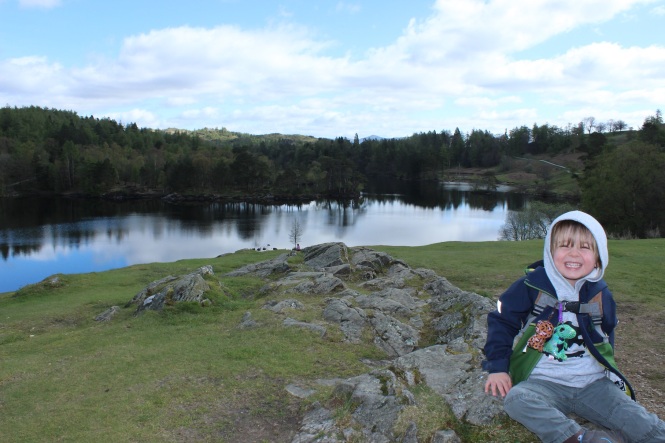 From here, we made our way to the footpath on the left hand side of the lake. Herdwick sheep and Belted Galloway cattle can be found grazing by the tarn, so we kept Rocky and Pebble on their leads as we tramped along the footpath. Unfortunately, Rick had made a school boy error and opened the motivational bag of sweets far too early so Rowan took advantage, stopping every two minutes because he needed energy (read Haribo). After a quick chat, and look at the map, we came to the understanding that we needed to save the sweets and he could next have one when we reached the stile at the top end of the lake.

As we walked round the bends in the path, a new view of the lake or trees was revealed to us. My camera was never in its bag and one of the hardest parts of coming to write my blog is always whittling down the dozens of photos have taken to just a few. I wasn’t this snap happy when there were only 36 photos available on the roll of film. There are plenty of opportunities to go exploring (or just have a sit down) off the path and one of Rowan’s favourite discoveries, along with the ducks, was the penny tree, which we told him was for making wishes. 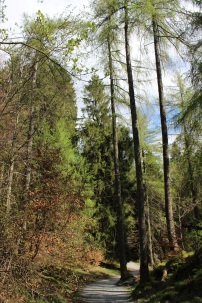 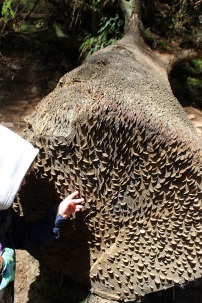 Presently, we arrived at the top of the lake, and not one to forget sweets, Rowan claimed his “energy” then scrambled over the stile to head up the grassy trail that began to climb out of Tarn Hows. Being little dogs, Rocky and Pebble managed to wriggle under the fence meaning we didn’t have to man handle them over which I’m sure they were quite pleased about. 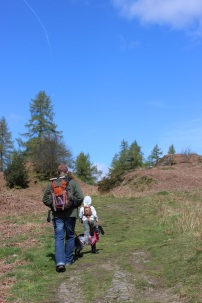 This short path led us to a gate where we turned right onto rocky track. We took the opportunity to have another look at the map so I could show Rowan how the path would bend one way then the other before we would arrive at another gate that would lead us to the Iron Keld plantation. The sun was shining down by this point and as we walked along the path, Rowan pointed out everything that caught his attention. The things he notices always amazes me, like the fact that the new pine cones were a different colour to the old ones. 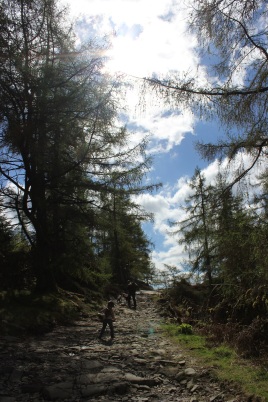 We left the plantation through another gate and took the left fork of the path, some Belted Galloway cattle watching us walk past from their spot in the shade. We reached another wall, and this time, rather than passing through the gate, we turned right crossing the soft ground to follow the line of the wall. Our route gently climbed until, looking to our left, we were met with an amazing view across Little Langdale to Crinkle Crags, Bowfell and the Langdale Pikes.

From here, we could also see there were a number of people relaxing at the top of Black Fell, so rather than subject them to our yapping mongrels, we decided that this would be a good spot to have our lunch.

Suitably satisfied, we continued over the hummocky grass landscape towards our objective. As there were no livestock grazing, we let the dogs off the lead for a bit. It was lovely to watch the two of them running after each other, with Rowan trying to keep up. One thing I loved about this walk was how safe it felt. Once on the grass, Rowan could run and explore the knolls to his heart’s content without fear of tripping up over the rocks. 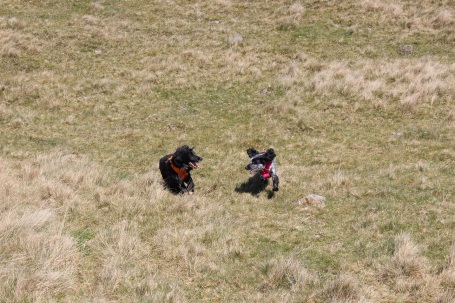 As we neared the final climb to the top, we put the dogs back on the lead before we followed the zig zag path to the top. Didn’t want these giddy spaniels tripping anyone up.

Black Fell is marked by a trig point, which Alfred Wainwright said was ambitiously named Back Crag. The little rocky summit provided some excitement for Rowan as he was free to scramble to the top on his own while I tried not to trip up over the dogs. We were able to see Lake Windermere, Ambleside and the Fairfield Horseshoe (which I might have to revisit very soon). It was so clear, we could also see the offshore windfarm. 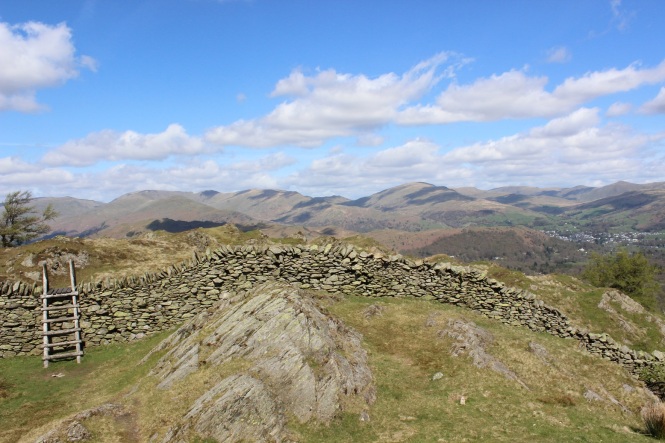 After visiting the trig point we walked over to the large seated cairn to have my obligatory brew and admire the views some more. We took some lovely photos – least they would have been had I noticed I’d knocked my camera into a semi manual mode with completely wrong settings for such a bright day. The result was lots of over exposed photos for much of the return leg of the walk.

To return, we walked down the zig zag path we had climbed up then followed a cairned path to our left back to the Iron Keld plantation. Rowan took great delight in searching out small pebbles to add to the top of each pile of stones.

Upon reaching the Iron Keld plantation, we retraced our steps back to the stile at Tarn Hows, where we returned to the car park along the path on the opposite side of the lake. A foot bridge on the route allowed Rowan to treat us to his rendition of the Billy Goats Gruff, with Rick being the terrible troll that was head butted from the bridge.

Shortly after this, Rowan again decided he would go no further and a tantrum ensued. Rick managed to talk him round to continuing the walk with no more sulking and he spent the rest of the way back balancing on felled trees and practising his scrambling skills in a craggy hollow. He also made a wish on a coin he put in a tree stump. Despite being told not to tell us what his wish was, he couldn’t wait to whisper that he’d wished to be a good boy. Bless him.

Before we knew it, and with a slight breaking of the no carrying rule, we were back at the car park and where the waiting ice cream van provided blueberry ice cream for Rowan and dandelion and burdock for me and Rick. The dogs had to make do with resting their paws.

This was the ideal first Wainwright for Rowan. The distance was just far enough, the height gain was barely noticeable and everywhere there were places he could explore on his own. If you are interested in the route we took, you can find it here. Now I need to plan our next walk.